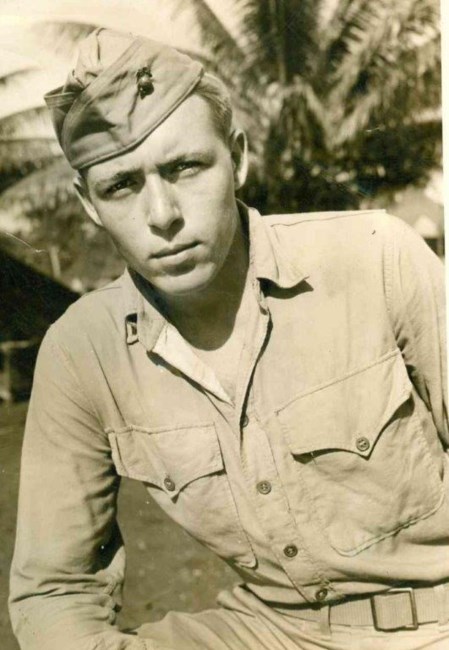 Clifford Lee “Speedy” Burdette, 90 passed peacefully through heavens gates on February 20, 2016 in Ashland, Kentucky. Cliff was born in Handley, WV on February 12, 1926 to the late William and Anis Walker Burdette, formerly of Oak Hill, WV. In his younger years, Cliff played semi-professional football where he earned the nickname, “Speedy” that he carried with him through his life. He served in the U.S, Marine Corp from 1944 to 1946 and again from 1950 to 1951 serving in Iwo Jima, Korea and China earning many decorations including three (3) Purple Heart awards for injuries suffered during battle. After leaving the Marines as an E5 Sergeant, Cliff held a variety of jobs including Police Officer in Fayetteville, line supervisor at Palmolive in Indiana and men’s clothing salesman in Columbus Ohio before a long career (1960-1988) with the West Virginia Department of Natural Resources, retiring as Administrator for WV Dept. of Energy. Upon retirement Cliff moved to Holiday, Florida where he enjoyed traveling, local theater and concerts. Some of Cliff’s many interests include lifetime member of The Masonic Lodge (32nd degree), Loyal Order of Moose in Oak Hill, where he served as Treasurer for many years, the American Legion in Fayetteville, Oak Hill Men’s Bowling League, where he enjoyed playing and serving as Treasurer, and refereeing WV high school and college football and basketball games across the state. Mr. Burdette was an active member of the Presbyterian Church and served as Deacon, Men’s Ministry Leader and Church Council member in his local congregations in both West Virginia and Florida. Cliff was blessed with a large family with the late Joan Bullion Burdette and made many memories on annual family trips to his favorite vacation spot, Myrtle Beach, South Carolina. Besides his parents, Cliff was preceded in death by his daughter, Belinda Burdette Aliff, his brother, Bill and sisters Wanda and Thelma. Left to cherish his memory and live his legacy are four sons, Clifford (Barbara) Burdette, II of Hurricane, WV, Mark (Debbie) Burdette of Louisa, KY, Dana J. Burdette of Mannington, WV, and Scot (Kelli) Burdette of Granville, OH; one daughter, Vickie (Steve) Basham of Dale, IN; grandchildren, Wesley Burdette, Stacey Johns, DannyLee Burdette, Daniel O’Neal, Tarah Talbert, Lana Burdette, Nathan Burdette, Justin Burdette, Stephen Basham II, and Stephanie Basham; and ten great-grandchildren. Funeral services will be held at 12:00 PM, Friday, February 26, 2016 at Dodd-Payne-Hess Funeral Home, 350 W. Maple Ave., Fayetteville WV, with Pastor Cliff Burdette II officiating. The family will receive friends from 10 AM prior to the service at the funeral home. Online condolences and other information available at www.doddpaynehessfuneralhome.com. The family has entrusted arrangements to Dodd-Payne-Hess Funeral Home, 350 W. Maple Avenue, Fayetteville, WV.

In Memory of Clifford Lee Burdette