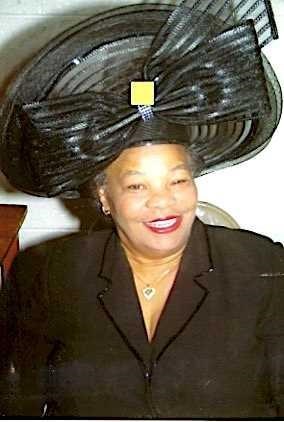 Eva Rosamond McIntosh was born on March 27, 1941, in Palestine, Texas as the ninth child of thirteen children to the late Mr. and Mrs. Amos and Margaret Hollie. At an early age, Eva accepted Christ while attending New Canaan Baptist Church in Palestine where she began singing at the tender age of nine, sometimes having to stand on a crate to be seen by the audience. She became an accomplished vocalist using her God-given talents and gifts throughout the city and surrounding areas. She was sought after for solo performances and concerts for more than five decades, even appearing on a television show as a guest soloist. Throughout Eva’s life, she was well-known near and far for her appreciation and captivating delivery of gospel music, such as “Touch Me Lord, Jesus” and “Because He Lives”, which were two of her signature hymns. Upon graduating from A.M. Story High School in Palestine, Eva relocated to Fort Worth, Texas where she joined Mt. Olive Missionary Baptist Church and faithfully served as an active member for nearly sixty years. Unapologetically, an agent for change, socially conscious, politically active, Eva did not hesitate to speak out against injustices. She was instrumental in the progress and success of many social issues such as smoking ordinances and curfews for children. Her life was a true testament to what it means to be a servant-leader. Well-known for her exquisite culinary skills, Eva took great pleasure in serving delicious meals to the members of her church, family, friends, and anyone in need. She loved to bake sweet potato pies, pound cakes, and peach cobblers. She was a wise loving mother, whose dedication was apparent in the unlimited sacrifices she made to ensure her children were properly educated and equipped with Christian values and her entrepreneurial spirit. She would charm people with her witty sense of humor, her flair for fashion, and her brilliant smile that would light up any room. Eva was truly a phenomenal woman and an incredible mother and friend, Eva was preceded in death by her parents: Mr. and Mrs. Amos and Margaret Hollie; son: Thomas “Buster” Samuel Jr.; brothers: Amos Hollie Jr., Charles Hollie, William Hollie, Henry Hollie, and Phillip Hollie; sisters: Imogene Beard, Althea Wilson, and Minnie Hollie. Those who will cherish Eva’s memories and continue her legacy are her loving children: Caren Samuel; Carl Samuel; Myra McIntosh, Esq.; sisters: Lottie Birdow, Margaret (James) Stubblefield, Rose Ables; brother: Wallace (Selena) Hollie; sister-in-law Bettie Hollie; four grandchildren, six great grandchildren, and a host of nieces, nephews, extended family, and friends. Fond memories and expressions of sympathy may be shared at www.gwspencerdirs.net for the Mcintosh family.
See more See Less

In Memory of Eva R Mcintosh