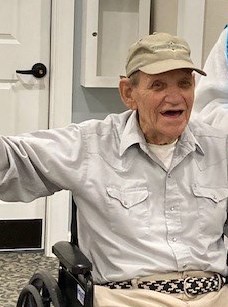 William “Bill” Cockrum April 27, 1935 - September 30, 2022, Fort Worth, Texas – At age 87, Bill passed away, at his home in Fort Worth, Texas. Bill was the youngest of 4 children born to Ruby and Claude Cockrum. Bill enjoyed spending time outdoors, watching sports on TV, and walks with his sister Allene. Bill is preceded in death by his parents, Ruby and Claude Cockrum and two sisters, Faye Owings and Bessie Cartuhers. He is survived by his sister, Allene Weare and her husband Jack Weare of Fort Worth, Texas and many nieces and nephews. Bill was born in Wichita Kansas where he was raised with his three older sisters. He attended high school in Wichita where he made the high school basket ball team. After High School, Bill joined the US Army where he served from Nov 1958 to September 1960 Battery “C” 1st Missile Battalion 517th Artillery. After the Army, Bill moved to Las Vegas where he became a black jack dealer. It was there that he met Lee, the love of his life and were married for over forty years. Bill and Lee eventually moved to Laughlin Nevada. They joined Laughlin Baptist Church where he met pastor Phil Workman. There he asked to be baptized and accepted Jesus Christ as his Lord and Savior. Bill’s life was full of hard times and struggles I believe Bill’s path in life is summed up in a letter he wrote to God: Darling Father God, I read your love letter everyday that you wrote to me through your Son and my Savior. I want to thank you darling Father for your unconditional love for me that you gave your only beloved Son. Thank you sweet Jesus for giving your life for my life. What greater sacrifice is there than someone giving their life for someone else. None that I know of. Thank you precious Jesus for covering my sins with your Holy Blood for I may spend an eternity in Heaven and not in hell. The thought of seeing my Savior’s face makes me want to tremble but even more to think I will be able to embrace you and kiss you on the cheek. O, beloved Savior how I praise you, love you, for never giving up on me and hearing and answering my mother’s and sister’s prayers. Thank you Father for blessing me with a wonderful wife. I will write more next time but better yet will tell you face-to-face. I love you Father your child, Bill Cockrum P.S. See you soon
See more See Less

In Memory of William Gerald Cockrum