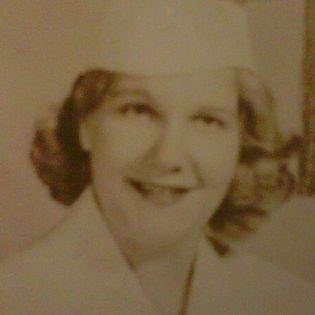 Edwina Cecile (May) Bryant, “Mom” and “NaNa” was called home to our Lord on 27 July, 2022 in Wetumpka AL. Edwina was born on 27 October, 1936 in Georgiana, Alabama to Willard May and Gail Barganier May who both preceded her in death. She graduated from Georgiana High School in 1955 and received her Registered Nurse degree from St. Margaret’s School of Nursing in Montgomery, AL. While attending nursing school she met and married Roy Bryant, a member of the USAF. After graduation from nursing school, she worked at Georgiana hospital in between military assignments and finally for good from 1976 to her retirement. She enjoyed family (especially those who called her NaNa), Christmas gatherings, reading, and traveling. She was preceded in death by her husband Roy Eugene Bryant Sr., daughter, Melanie Bryant and brother Herbert May She is survived by sons Roy (Gene) Eugene Bryant Jr. (Rhonda), Willard (Will) Aaron Bryant (Adele) and daughter Teresa (Tee) Louise Bush (Tracey), Grandson Trey Bryant Bush (Lindsay), Granddaughters Tia Gail Bush Stephens (Cole), Melanie Elizabeth Bryant Bodiford (Blake), Megan Ruth Bryant Harris (Connor), Morgan Nicole Bryant, Mary Kathryn Bryant, Great Granddaughters Alice May Bush, Evelyn Edwina Stephens, and Great Grandson Owen Blake Bodiford. She also leaves behind siblings Shirley Swanson (Robert), Sharon Schroeder (Jay), Richard (Dick) May (Veronica), Sue Ellen Nichols (Glenn) and numerous other family members and friends. A longtime member of Calvary Baptist Church in Georgiana, she spent her final years in Wetumpka, AL where she attended Mountain View Baptist Church and was a member of their Adult Ladies Sunday School class. Funeral services for “NaNa” will be conducted at Johnson Funeral Home in Georgiana, Al on Saturday, 30 July at 2:00 o’clock, with Brother Jonathan Smith officiating. Burial will follow in Oakwood Cemetery in Georgiana, Alabama. A Gathering of Family and Friends will be at Johnson Funeral Home on Saturday, July 30 from 1:00 pm until service time.
See more See Less

In Memory of Edwina Cecile Bryant