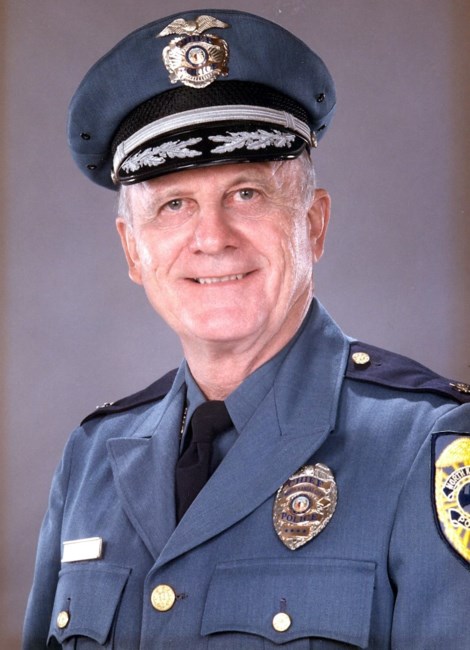 Clarence Henry Hoffman passed away peacefully in his sleep on Saturday, November 21, 2020. Clarence was born September 13, 1924, to Henry and Alice Hoffman (deceased), of Denton, Kansas. He was predeceased in 2011 by his beloved wife of 56 years, Ella Marie Hoffman. He is survived by sons Michael (Linda) Hoffman of Parkville, MO and Patrick Hoffman of New York, NY, and daughter Kelly Repasky (beloved Nicholas J. Repasky - deceased) of Smithville, MO; two sisters, Alice (Bruce) Horvath and Eileen (Bob) Bradford; two granddaughters, Megan (Nate) Hetmanek and Anna (Beck) Yon, one great-granddaughter, Monroe Marie Hetmanek, one great-grandson, Easton Michael Hetmanek, just born on November 17, 2020; and numerous beloved nieces and nephews residing in Kansas, Minnesota, and Texas. Clarence attended high school in Bendena and Denton, Kansas. He later graduated from Rockhurst University (Bachelor's degree), where he received the award for Outstanding Officer in the Criminal Justice Program; and the University of Utah (Master's degree). Clarence enlisted in the U.S. Army Air Force during World War II and served from 1943-1945. He flew on 35 bombing missions mostly over Berlin and Bremen, Germany on a B-17 Flying Fortress as a 19-year-old tail gunner. After WWII, he joined the Kansas City, Missouri Police Department (1946-1975) where he rose through the ranks of Patrolman, Corporal, Sergeant, Lieutenant, Captain, and Major. During his law enforcement career, Clarence served in the Personnel, Planning & Research Units and the Tactical Unit. During his tenure he also served as Commander at the South and North Patrol Stations. He received an appointment from Chief Clarence M. Kelley to the FBI National Academy in 1962 and later served as National President (1972-1973) of the FBI National Academy Associates. Clarence also served as a Board Member of the Kansas City Police Department Credit Union for 23 years including a tenure as President. After serving for 28 years in the KCPD, he next became Chief of Police of North Kansas City, Missouri (1975-1989) where he served that city and community for 14 years. He is credited with modernizing and professionalizing its law enforcement operation, including management and accountability systems within the department. After retirement from the NKCPD, Clarence served for an additional 12 years as the Executive Director of the Missouri Peace Officers Association, at which time he was involved in their official publication, Law Enforcement magazine. Proceeds from the magazine sponsored college scholarships for Missouri high school students at the University of Missouri, where Clarence taught criminal justice courses. Clarence was a life member of the International Association of Chiefs of Police, the FBI National Academy, and the Missouri Peace Officers Association. He received the Communicator of the Year Award from the City of North Kansas City. During his law enforcement career he was honored to receive the Clarence M. Kelley Award as Law Enforcement Administrator of the Year, sponsored by the American Society for Industrial Security and the Kansas City Crime Commission. He was also presented with the Outstanding Police Administrator Law and Order Award from the Missouri American Legion. Clarence was a devout Roman Catholic and a member of St. Gabriel Archangel Church where his children attended grade school, and after that a member for many years of St. Patrick Church, and a 3rd Degree Knights of Columbus there. Clarence was an avid life-long fisherman and hunter, enjoyed golf, and a loyal fan of the Kansas City Royals. The family would like to acknowledge the many people who helped to so kindly care for Clarence in recent years at McCrite Plaza at Briarcliff, Mayor and Chief Bill and Charlotte Biggerstaff, and most of all, his loving daughter and caregiver Kelly Repasky. No daughter could have loved or taken better care of their father. Due to Covid restrictions, attendance is restricted. Services will be available via Facebook Live at at Newcomer's White Chapel Funeral Home Facebook page or St Patricks Catholic Church (https://www.facebook.com/St-Patrick-Catholic-Church-461466814256959 or go to Facebook and search for "St. Patrick Catholic Church" and "like" our page. When we go live the video will pop up) If you don't have Facebook, St Patrick's will upload the video to YouTube immediately following the service.
See more See Less

In Memory of Clarence Henry Hoffman