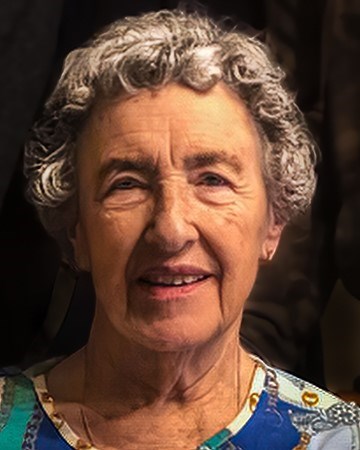 Rosalie Arruabarrena went to be with the Lord on September 14, 2022. She was 94. Rosalie was born on February 25, 1928 to Miguel and Manuela (Oyarbide) Echeverria in Baliarrain, Guipuzcoa, Spain. Educated in private schools, she graduated with honors and a degree in business. In 1951 she met the love of her life, Martin Arruabarrena, whom she married at the Basilica of Our Lady of Aranzazu in Onate, Guipuzcoa, Spain. Shortly after, she joined Martin leaving Europe for the USA and settling in Montrose, Colorado where they purchased and operated the Mesa Hotel for 39 years. She always enjoyed helping and meeting new people and quickly made friends with everyone she met, maintaining communication with many throughout her life. Always willing to lend a hand, Rosalie was an active member of St. Mary’s Catholic Church where she volunteered as a Eucharistic minister, spent countless hours comforting the sick in nursing homes and in hospitals, and actively participated in the Altar Rosary Society and the women’s auxiliary group of the Knights of Columbus. After retiring from the hotel business in 1990, Rosalie continued to put the needs of others in front of her own. She continued her work with the Church and became dedicated to contributing to the good works of the Emblem Club (ELKS). Traveling became a priority in which she enjoyed the opportunity to see much of the USA and returned to Europe several times. Closer to home, she enjoyed the outdoors and became quite a gardener. Neighbors and friends always complimented her on her prize winning flowers. She also won several awards for growing her own fruits and vegetables and for creating delectable jams, preserves and baked goods that family and friends heartily enjoyed. Rosalie moved to Grand Junction in 1998 where she continued her activities and also became a volunteer for OUTREACH. Rosalie spoke four languages and used her talent conversing with her many friends and family. She lived her life with respect for the wonder of nature and for her passionate love of God and family. She was a devoted wife, mother, grandmother and great grandmother who will be forever cherished. Preceding her in death were, her loving husband of 59 years, Martin; sister, Maria Dolores and other relatives in Europe. Survivors include daughter; Rose Morgan of San Jose, CA and granddaughters, Erin Morgan of San Jose, CA and Nicole and her husband, Tom Barilla and great granddaughter, Catherine of Fullerton, CA; son, Michael and his wife, Deborah and grandsons; Devin of Denver and Sean of Salt Lake City, UT; daughter Joan and her husband, George Valdivia of Los Angeles, CA. She is also survived by her sister, Julia of Logroño, Spain, several cousins, nieces and nephews in Europe, several god children, and many close and special friends. She will be dearly missed. A Rosary will be held at Callahan-Edfast Mortuary at 7:00pm on Sunday September 25th. Funeral services for Rosalie will be held at St.Mary's of Montrose at 11:00am on Monday September 26th. Following the funeral service a graveside service will be held at Cedar Creek Cemetery of Montrose at 12:30pm. Friends and family are invited to attend a reception and celebration of life at the Elks Lodge #1053 of Montrose following the graveside service. Fond memories and expressions of sympathy may be shared at www.callahan-edfast.com for the Arruabarrena family.
See more See Less

In Memory of Rosalie Arruabarrena