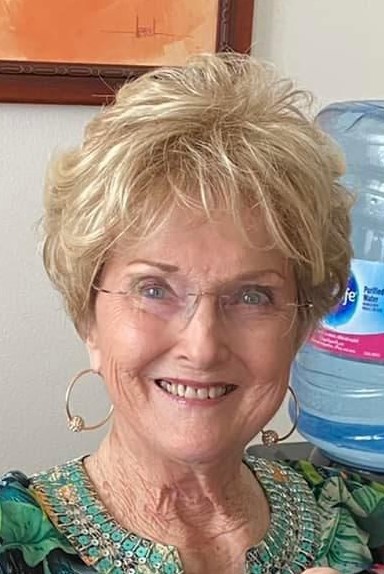 Darlene Alys Storey Flatt Turner passed away peacefully on Jan 22, 2022 at the age of 89, surrounded by loved ones in Arlington,TX Darlene was born to Anna Pindell Storey and Harry Storey in Aurora, Indiana on February 24, 1932 - in the middle of the Great Depression! The house she grew up in didn’t have electricity, indoor plumbing or a phone. But what she did have was a lot of love and open space to play. Darlene started her first job washing dishes at 12 years old at a little restaurant called the Chat “n” Nibble. Her mother encouraged her to learn piano and she became an excellent pianist at a young age. Her family attended a little church called The Pilgrim Holiness Church and that’s where her music ability blossomed. Darlene met the first love of her life Earl Flatt in Nashville, TN. They moved to Lafayette, La where they were married for 63 years until Earl passed away in 2014. During her time in Lafayette, she adopted three children and played a vital role in her community & her husband’s great success with State Farm. Her love of music continued during this period as she was part of the singing group 3 Sharps and a Flatt. After her husband passed away, Darlene moved to Dallas, TX to be close to family. This is where she unexpectedly met her 2nd true love. Mr. Bill Turner. Darlene and Bill were married and spent 5 wonderful years together. Darlene loved Bill who served honorably as a Marine like her first husband. Darlene was tough, kind, funny, generous, and uncommonly loyal. She left an impression on everyone she met. She was truly unforgettable. Darlene is survived by her spouse, Bill Turner; children: Vickie Collins (Bobby), Lauren Heinfeld (Zack), Jon Flatt (Ana Catalina Viana), Dianne Owens, Mike Turner (Darla); sister Audrey Lameier; brother Bobby Storey; Grandchildren: Taylor Rose Collins, Hannah Heinfeld, Rachel A Flatt, Wesley Robert Flatt, Alys Flatt, Lee Anne Flatt, Olivia Flatt; step-grandsons Blake Turner and Brandon Turner; Great grandchild: Cooper Flatt and Nate Flatt. Fond memories and expressions of sympathy may be shared at www.grandprairiefh.com for the Turner family.
See more See Less