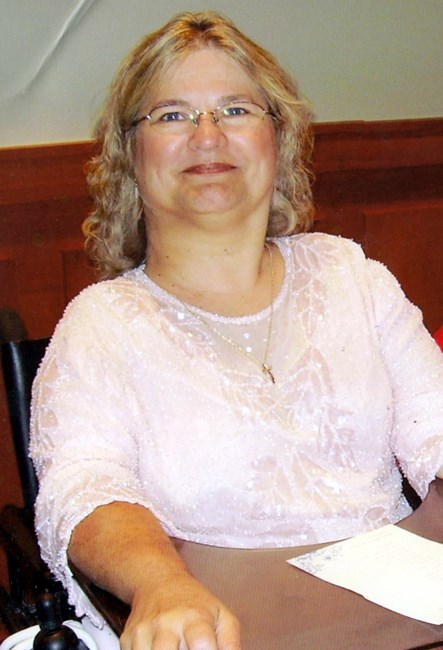 Vanessa "Happy" Johnson, age 65, of Grand Prairie, Texas passed away on Saturday February 23, 2019. Vanessa was born November 7, 1953 in Dallas, Texas to Edward Rudolph Kaderka and Merle Maxine Hill. Vanessa is lovingly remembered as a very determined and devoted woman despite obstacles she encountered at an early age in life. Her love and devotion to Catholicism was admirable starting from the time Immaculate Conception Catholic School gave her the opportunity to study when no other school would admit her due to her condition when she was a child. She was told many times she could not do what others could do, and each time, she proved them wrong; first by surviving the effects of polio, many operations, attending school and college along with learning how to drive. Vanessa met Jerry Johnson in 1970. He was a Counselor at the Soroptomist Camp in Argyle Texas. Jerry recalls them talking on the phone a lot, and the time when they went on their first date to the drive-in theatre to watch MASH, and later he learned she was upset at him for not "making a pass" on her. They both enjoyed traveling to New Orleans. Although they were very close, they drifted apart. During this time, she became a member of the SPJST Lodge 84, an active member of Lodge 249 Order of the Eastern Star, as well as the Order of the Rebekah, Lodge 84. Vanessa and Jerry reconnected in March of 1983 along with Vanessa’s son, Brian, and got married in December of 1996. They have been happily married for 22 years. One of her hobbies started in 1995, by raising and breeding canaries for competitions (her first bird's name was Tweety), and her special breed canaries won many awards. Vanessa's other hobbies included word search puzzles, and loved doing plastic canvas. There are so many other words and accomplishments and experiences that that can describe what an incredible person she is. Vanessa is preceded in death by her parents and brother, Rodney Lynn Kaderka. She is survived by her loving husband, Jerry Johnson, Son, Brian Kaderka and wife April, sister Jan and her husband Jack Black, sister Kathy and her husband Bobby Sherrill, grandaughters which are twins: Katelyn and Lilly Kaderka, and grandsons, Brian II and Riley Kaderka. All of the following services will be at Bean-Massey-Burge Funeral Home Beltline Road, 2951 S. Grand Prairie, TX : Visitation for Vanessa will be held Saturday, March 2, 2019 from 9:00 AM to 11:30 AM. Following will be rosary service from 11:30 AM to 12:00 PM. A celebration of life service follows from 12:00 PM to 1:00 PM. A reception will follow from 1:00 PM to 2:30 PM. Fond memories and expressions of sympathy may be shared at www.beanmasseyburge.com for the Johnson family.
See more See Less

In Memory of Vanessa Johnson