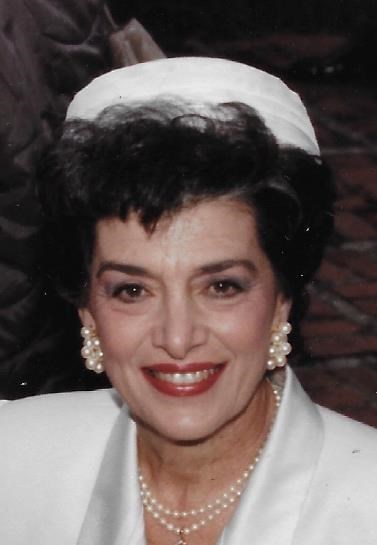 Emilie Demosthenes Theodore left this world, and a whole lot of loved ones behind, on October 29th, 2020, for a life eternal with her Lord & Savior Jesus Christ. Her footprints indelible, her wake far reaching and her infectious magnetism will be most remembered. Emilie, born on June 10, 1929 as an only child of Nick and Angela Demosthenes, who immigrated from Greece in the early 1900’s, rose to become South Carolina’s Second Lady from 1986-1994, and served proudly and with honor. During those years Emilie visited every county as she faithfully served her husband, Nick Andrew Theodore, in his role as S.C’s Lt. Governor. Emilie’s passion for S.C. led to her creation of a S.C. State Coloring Book for children that depicted memorable and historical places that resonated with our state’s motto: “While I breathe, I hope”. A motto Emilie epitomized. Emilie even composed campaign related cookbooks (Theodore’s Tasty Treats) that promoted good food and good government. These cookbooks still live and are used in the kitchens of S.C. citizens today. Emilie attended public schools in Savannah, Ga and graduated from Savannah High School and the University of Georgia, Savannah campus. Emilie was a gifted artist and athlete, and became an accomplished tennis player and was the Savannah City champion during her high school years. Emilie was a lifelong and faithful member of the Greek Orthodox faith. Emilie first met Nick in 1948 while attending a youth basketball rally with her church hosted by the Sons of Pericles chapter of the St. George Greek Orthodox Church here in Greenville. After an extended courtship, Emilie married Nick on April 24, 1955. Emilie moved to Greenville and little did she know what a lasting impact she would have upon this city, South Carolina, and its political landscape. Emilie and Nick remained steadfastly in love for 65 years and profoundly impacted God’s kingdom, our family, her Church (St. George), Greenville and all of South Carolina. Emilie spent her entire married life being a partner to Nick in all his endeavors, especially his political career. Emilie became, in short, his greatest ally and wisest counsel. Emilie became in her own right a public servant. Although a devout Greenvillian, she touched and met more people in places throughout the State of S.C., and did so with a remarkable recall of each person she met, and where they met. It was never a surprise to her friends and family that all of those she touched remembered her like it was yesterday. Emilie once said and would repeat often that “I’ve grown quite attached to this State and while maybe small in number, the quality of its people and environment is unsurpassed.” Emilie found a way and a balance to raise three children, support her husband, her Church, the “campaign trail”, a host of community causes, and to remain a dear friend to many. Her dear friend Betty Farr once said “no matter how crazy her schedule or the circumstances of the moment, Emilie would always find time for you, even into the late hours of the night. She was always up and always willing.” Emilie devoted herself to causes and served as a chairperson or as a board member to many local and statewide organizations (Palmetto Cabinet, Winthrop University, and USC Medical School among a few). She loved the arts and devoted herself to the Greenville Symphony, S.C. Children’s Theater and The Carolina Ballet. Also a member of Greenville Women Giving, it was no surprise that Emilie was recognized as one of Greenville’s 25 Most Beautiful Women. Emilie had so many “loves” and “passions”. Shagging w/ Nick ( or anyone who could but no one followed Nick ) , “ chocolate” anything really, mostly cake; trivial pursuit ( because she knew she would win ) , family gatherings, late night eat outs-anywhere, her birthday party ( a bit spoiled by us all, we admit ) the beach, trips to Greece , a “ spontaneous “ anything . Emilie was known for always saying “yes” to an invitation, and taught all of us that when you are invited somewhere by someone who sought to include you, you attend and give thanks. Emilie leaves behind her husband Nick, three children, twelve grandchildren and four great grandchildren, to whom she was affectionately known as “Yia Yia”. The children are Andrew Nick Theodore (Elyse); Angel Theodore Tollison (Walter), Stefi Theodore Taylor (Shane). The grandchildren are: Nick ( Stephanie ) Theodore II ;Rossi (Spencer) Green; Georgia (James) Williams; Jack Theodore; Walt Tollison IV; Emilie (Boyd) Blanchard; Gray ( Reid ) Tollison ;Thea Tollison; Smyth Taylor; Robert Taylor; Nicholas Taylor; Kaytina Taylor. The great grandchildren are: John McAllister Green; Nancy James Tollison; Andrew Nicholas Theodore II and Emilie Harper Blanchard. In light of Covid and out of respect for all of Emilie’s loved ones, only the immediate family will attend the Trisagion service on November 1st and the extended family for the funeral on November 2nd at St George Cathedral. The funeral service can be watched by going to StGeorgeGreenville.org and scroll down to click the You Tube Live streaming link .A celebration of Emilie’s life will be held at a later date. In lieu of flowers, any donations or contributions in honor of Emilie may be made to St. George Cathedral. One can donate online at www.stgeorgegreenville.org or mail a check to St George Greek Orthodox Cathedral, 406 North Academy St., Greenville, SC 29601. Note “In Memory of Emilie Theodore” with your contribution. Nick and the family want to thank dearly the hospice care team that cared for and loved over Emilie the past weeks: Charlene, Janice , Donna, Sheba, Debbie and Yolanda. We are grateful. Arrangements by Mackey at Century Drive; Online tributes at www.MackeyCenturyDrive.com
See more See Less

In Memory of Emilie D Theodore