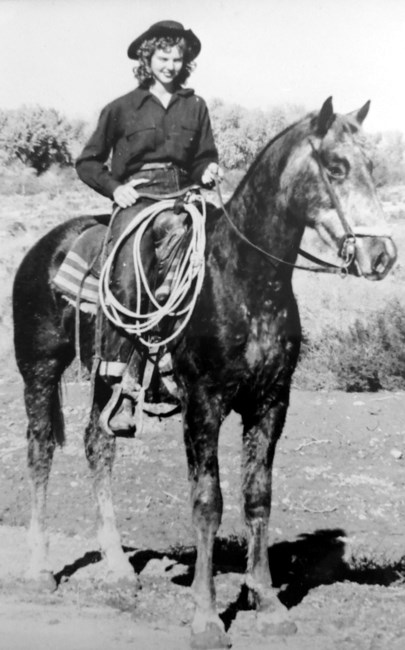 Mary Rae Murphy, born September 28, 1930 in Las Vegas to Raymond A (Pete) West and Helen (Mickey) Galavan West passed away surrounded by her family early on Sunday morning of September 18, 2022. She was married to Philip D Murphy from 1949 until his passing in 1995. She was a Nevada pioneer woman, starting out in Overton Nevada, but really reared on the Weiser Ranch on the banks of the Muddy River in Glendale NV, where they raised cantaloupes and alfalfa and cattle. She was a farm girl, with a team of horses, she operated the farm equipment, plows, discs, rakes, mowing machines, wagons, everything needed to plant and harvest the crops. Mary was Rodeo Queen for 2 years during her high school years at Moapa Valley High School. She attended the University of Nevada Reno as an English Major for one year before she returned to southern Nevada and married Phil. She was an integral part of PM Mechanical, which she and Phil started in 1977 performing plumbing and Air conditioning work and other industrial projects until 1999. One of Mary’s favorite hobbies was gardening. She attended the University of Nevada Reno Master Gardener program in 2006. Working in her garden was her passion. Mary was pre-deceased by her husband Phil in April of 1995, daughter in law Debra, daughter Colleen in November of 2021, and son Dan in June of 2022. She is survived by her sister Nevada Graf, sons Murray (Pete) (Maria), Patrick, and Thomas (Kristy), daughters Linda, and Molly, 17 grandchildren, and 24 great grandchildren. Services will be held for Mary and honor Colleen and Dan on Friday, October 28 at 2pm at the Palm Mortuary on Boulder Highway in Henderson. A reception will follow from 3 – 5pm at the Palm Mortuary location.
See more See Less