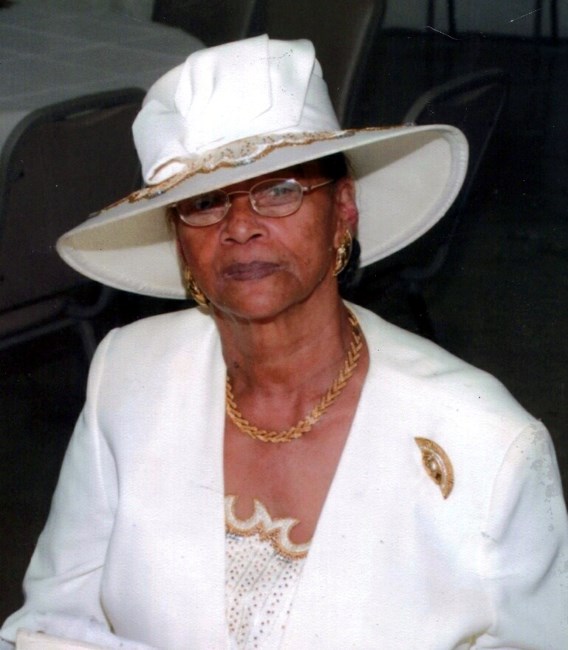 Queen and Matriarch Alberta Levier was born on May 4, 1934 in Opelousas, Louisiana to Cora and Archange Levier, who both preceded her in death. She received her education in Opelousas. Alberta accepted Christ at an early age and later became a missionary under the leadership of Rev. Hugh Pope at Greater True Vine Missionary Baptist Church in Houston, Texas. She was united in Holy Matrimony with Simon Castille on April 25, 1948. Elect Missionary Alberta Levier-Castille was a phenomenal woman, who was a servant and a leader. She was loved by everyone. Her life was dedicated to God and it showed in her relationships with family, neighbors, and the community. She was a dynamic speaker, sharing God's word with everyone. Missionary Alberta Castille was a proud member of Rose of Sharon Missionary Baptist Church for over thirty years, under the leadership of her husband and pastor, Rev. Simon Castille, Sr. After his death, she continued to serve under the leadership of Rev. James Castille and Co-Pastor, Rev. Gregory Castille. She faithfully shared her gifts as a dynamic leader and teacher. She taught Sunday School, was Mission President for many years, and organized the New Direction Outreach (formerly Women of New Direction). She was a sought-out speaker on many occasions. On September 12, 2022, at 9:30 a.m., Missionary Alberta Levier-Castille gained her wings and returned to the loved arms of God from the comfort of her home in Houston, Texas. Left to cherish her memory are her seven children: Simon Castille, Jr., James Castille (Sharon), Lois Dorsey (Alton, Sr.), Betty Walter, Brenda Castille, Gretta Castille, and Gregory Castille, Sr.; grandchildren: Alton Dorsey II (Kim), Jarkeisha Garza (Carlos), Cedric Castille, (Lynn), Crystal JN-Baptiste (Mathieu), Clifford Castille (Lakeisha), London Walker, Shalee Crawford (Darrell), Jamesha Barley (Jason), Gregory Castille, Jr.; Simone Castille; sister, Mary Louise Thomas; brothers, Rolan and Nolan Levier, and Margaret Lastrape; additional siblings: Leon Pickens (Camilla), Mary Jane Collins, Walter Pickens (Mary Alice), Martha Pettaway (Ira), Jesse Pickens (Debra), Daniel Pickens, Anna M. Pickens; Godchildren: Christy, Lorez, and L.C.; and a host of great grandchildren, special nieces, nephews, other relatives and many, many friends.
See more See Less

In Memory of Alberta L. Castille