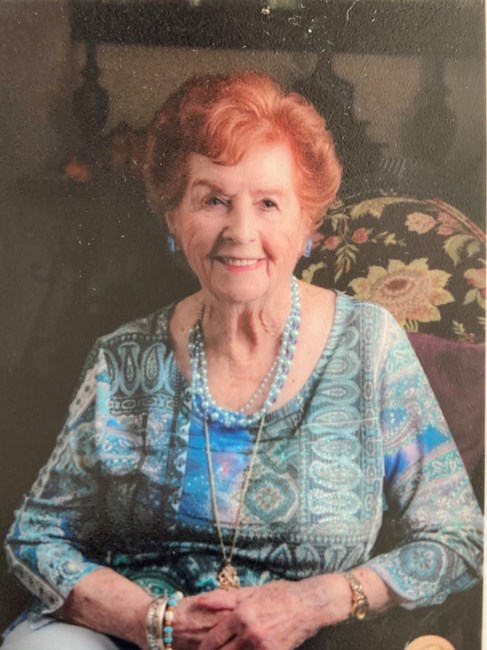 Blanche Niday Robinson Collins, 98, loving and beloved mother, grandmother, great-grandmother, aunt and friend to many, passed away on Thursday, the 28th of July 2022, to her eternal life. She was proud to be a native Houstonian born on the 3rd of July 1924, to Hannah & Dudley Niday. She graduated from Lamar High School in 1941 and attended North Texas State University in Denton, Texas. On the 1st of May 1943 she married her high school sweetheart, John V. Robinson, who preceded her in death after 51 years of marriage. They were blessed with a wonderful daughter and son. Her son, John V. Robinson, Jr., preceded her in death, as did her only brother, James E. Niday, and her parents. In 1997, the Lord blessed her with another wonderful husband, Major Collins. She loved his children like her own. At that time, Major being Baptist, Blanche became half Methodist and half Baptist, enjoying friendships in South Main Baptist Church as well as her beloved First United Methodist Church. She was a member of the Adelphi Sunday School class for over 30 years. After Major passed away, she moved to North Texas to be near family. Blanche loved beautiful things having worked with her mother for 15 years at Hannah Niday Florist, but she spent her later years working at Citizens National Bank, Park Bank, and Community National, all in Bellaire, establishing and working with their senior travel clubs. She is survived by her daughter, Judy Haire and her husband Rodney Haire; Major's son, Peyton and his wife Franny; his daughter, Carol McBee; plus three grandchildren, Nancy Rosenberg and her husband Brian, Rocky Haire and his wife Andrea, John David Robinson and his wife Kelcy; and 11 great-grandchildren. Blanche thanks God, her family, and her friends and co-workers for a happy and fulfilling life. She was interred during a private ceremony at Forest Park Lawndale Cemetery where her family gathered with Rev. Ann Spears and son-in-law Dr. Rodney Haire officiating. Those who desire may direct memorial contributions in her name to the Adelphi Class at First United Methodist Church, 1320 Main St., Houston, TX 77002; or to South Main Baptist Church, 4100 Main St., Houston, TX 77002.
See more See Less

In Memory of Blanche Niday Collins