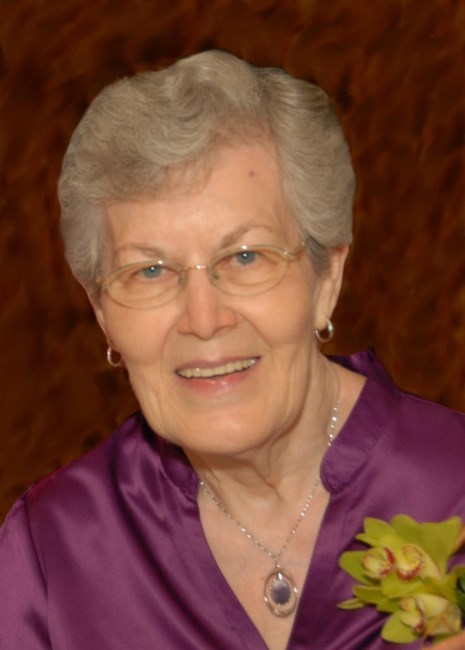 Eva Nell Anderson, 85 of Huntington went to be with her Lord and Savior on September 6, 2022. She passed away at her home, with her loving husband by her side. Eva Nell was born in Huntington on July 29, 1937, the daughter of the late Robert and Kathryne (Stevely) Rash. She lived in Huntington from kindergarten through college, graduating from Huntington High School in 1955, and Huntington College in 1959. On August 25, 1957, she wed Howard F. Anderson. The couple celebrated 65 years of marriage in August of this year. Howard survives in Huntington. Serving faithfully as a pastor’s wife for 30 years, Eva Nell took on many responsibilities in the various churches they served. One of her favorite roles was that of Sunday School Teacher. A position she returned to often, even well into retirement years. In addition to serving with her husband in the church, she also spent several years teaching elementary school in Garrett, Indiana, Rockford, Ohio and Spencerville, Ohio. And after her own children had grown, Eva Nell had the opportunity to serve as a nanny for a family for 15 years. A job she cherished. She greatly enjoyed music and could frequently be found at the piano playing one of her favorite hymns, either for her own pleasure or as accompanist for various singers and singing groups. She derived great joy from spending time with her grandchildren and great grandchildren. In addition to her husband Howard, she is also survived by two sons: Mike (Cathy) Anderson of Roanoke, Jay (Julie) Anderson of Temple City, CA; a daughter: Julie Sattison of Fort Wayne; five grandchildren: Nicholas Anderson, Brandon Anderson, Michaela Sattison, Danae’ Sattison, Logan Sattison; and two great grandchildren: Evelyn Anderson and Westley Anderson. She was preceded in death by two brothers: Charles Rash and Max Rash. Visitation will be held on Saturday, September 10, 2022 from 1:00 pm – 3:00 pm at the Myers Funeral Home Huntington Chapel, 2901 Guilford Street, Huntington, Indiana. Funeral service will be held on Saturday, September 10, 2022 at 3:00 pm following visitation at the Myers Funeral Home Huntington Chapel. Interment will be at the Pilgrims Rest Cemetery in Huntington County. In lieu of flowers, memorial donations can be made to Alzheimer’s Association – Greater Indiana Chapter in care of Myers Funeral Home, 2901 Guilford Street, Huntington, IN 46750.
See more See Less

In Memory of Eva Nell Anderson