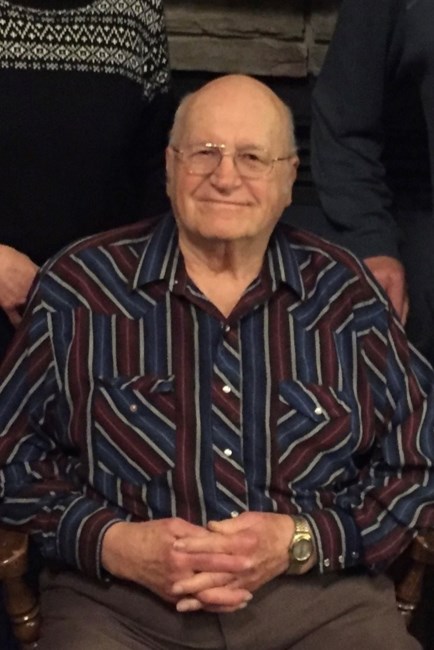 Orville H. Mathewson 93, of Idaho Falls, passed away Sunday November 3, 2019 at Teton Post Acute Care. He was born April 26, 1926 in Pontiac Illinois to Harry and Laura Mathewson. They moved to Idaho Falls when he was 3 years old. Orville proudly served in the military and fought in World War II in the Pacific. On September 29, 1946 he married Lennea Styhl. They had two children, Rod Mathewson and Nancy Grover. Three grandchildren, Justin Mathewson, Mandy Brown, and Ashley Prophet. They also had eight great grandchildren. Orville and Lennea were married for 53 years, until Lennea passed away. On December 11th, 1999 Orville married Marie Muirbrook. To this union he gained five children, Gailann (Richard), Wallace, Irene (Marvin), Vostrez, Paul (Pam) Muirbrook, Peggy (Dave) Bain, and Glenn Muirbrook. Ten grandchildren and eighteen great grandchildren. Orville and his father had a business called, “Harry Mathewson and Son Building Contractors”. Orville worked at Poitevin lumber, Bonneville Lumber, and then retiring from Anderson Lumber in 1988. He also built many homes in Idaho Falls, including his own Orville enjoyed woodworking, camping, fishing, and hunting. Orville and Marie enjoyed going to the Senior Citizen lunches in Shelley, going to Fort Hall, and Northern Idaho for blueberries. Orville was preceded in death by his parents, his sister Orel (Herb) Lawyer, his first wife Lennea, son in law Doug Grover, and his step children, Irene, Marvin, Glenn, and Pam. Orville is survived by his wife Marie Mathewson, son Rod Mathewson, (Marie Holverson), daughter Nancy (Doug Grover), three grandchildren, Justin Mathewson, Mandy (Dwight) Brown, Ashley (Adam) Prophet, and eight great grandchildren. Orville is also survived by his step children and grandchildren. We would like to thank everyone at Teton Post Acute Care for taking wonderful care of Orville. Dr. Avondet, and staff, the wound center at EIRMC, and the nurses at EIRMC. Funeral services will be held at First Lutheran Church on Saturday, November 16th at 1pm. 455 W. Sunnyside Road. In lieu of flowers, contributions can be made to First Lutheran Memorial Fund. Burial will immediately follow after services at Rose Hill Cemetery on Rollandet Road with Military Honors.
See more See Less

In Memory of Orville H. Mathewson