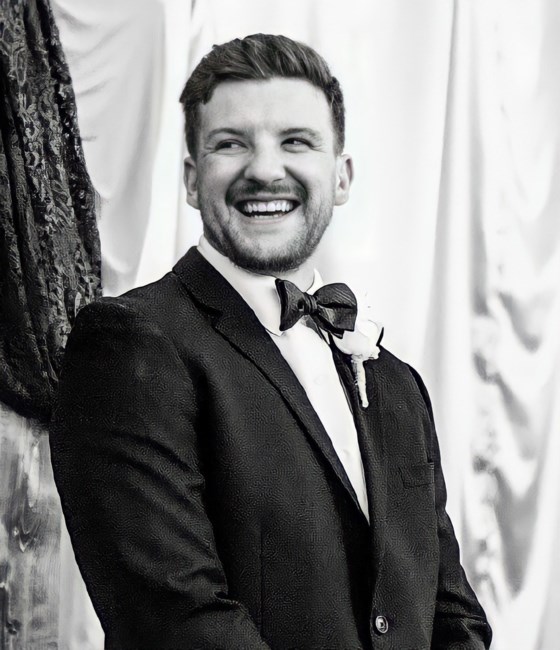 There is no way to properly describe the dynamic and charismatic man that was Joe Messina, but we will sure try. Joseph Matthew Messina was born November 13, 1994 at Scott Air Force Base in Belleville, Illinois to his parents Cynthia Leigh (Neitzke) Messina and Richard James Messina. Joe passed away at the age of 27 on March 6, 2022 in Colorado while traveling back home to Kansas City with his wife, Michelle Messina. Joe’s family meant everything to him. He is survived by his wife, Michelle (Schneidler) Messina; parents, Richard and Cynthia Messina; his sister, Lily Messina of Omaha, Nebraska; his brother, Timothy Messina of East Palo Alto, California; his grandparents, Walt and Karen Neitzke of Cypress, Texas; his grandparents, Vincent and Jackie Messina of Palm Harbor, Florida; along with many aunts, uncles, and cousins that he adored. Joe actually told Michelle he felt bad he didn’t spend as much time with friends on his wedding night because he wanted to soak up all the time he had with family that had traveled so far. Smoking cigars and telling stories on the back patio of the wedding venue after the big day was one of Joe’s favorite memories. Joe received a Bachelor’s of Science in General Studies from the University of Central Missouri in December of 2018. He used to joke that he was a jack of all trades, a master of none, but still better than a master of one. Which to those of you who know Joe, you know this is true. During his time at UCM, Joe was initiated into the Delta Chi Fraternity, played rugby for the college team, and had a multitude of jobs. He worked as a groundskeeper for the local golf courses, a kids gymnastics and kickboxing coach, and a bar manager. Joe was sworn into the Missouri Army National Guard as an Infantryman in October of 2013. While in what should have been his senior year of college, Joe was deployed to Qatar and served at Camp As Sayliyah returning home in December of 2017. Joe got a kick out of pushing the regulation limits on drill weekends, really embracing the firefighter stache he became so well known for along with his long luscious ginger locks. Joe ends his service with the National Guard posthumously promoted to Staff Sergeant. After college, Joe moved to Kansas City to be with his wife. While starting a life in Kansas City, he worked as an Investment Property Realtor for two years. Joe got so excited about real estate he convinced Michelle they should buy a duplex in Kansas City, Kansas and what an experience that was. In typical Joe fashion though, real estate just didn’t feel like the right fit. Joe was born for a career made of adrenaline and service to others which finally led him back to the path of fire fighting. Joe attended Hutchinson Community College’s Fire Academy in 2019, and finally completed his EMT course after the third time. If you ask Joe it wasn’t that the course was hard he just never took the National Registry Test. When you really look at it though this was just another example of how Joe lived his life in alignment. If it didn’t feel right at the moment he didn’t do it, but if he set his mind to something there was no way you would talk him out of it. In 2020 Joe started his firefighting career at Grandview Fire Department as a Firefighter EMT as well as part time service with the Southern Jackson County Fire Protection District. Starting the academy in April 2021, Joe made the change to join the Olathe Fire Department as a Firefighter EMT. On Easter day of the same year, Joe convinced Michelle they should visit a gym in Kansas City that had jiu jitsu lessons. The two had been talking about starting this forever, but Joe was the reason they finally pulled the trigger. They went to their first class the following week, and there was no turning back. They became a part of the VavaPirata Jiu Jitsu team within Kansas City and Independence, Missouri spending their nights and weekends rolling with their friends. We want you to remember the man described above more full of life than anyone you’ve ever met. A loyal friend who made everyone he met feel special. Just as Joe has made a permanent impression on everyone’s lives, we’d like to continue to create a lasting impact. In lieu of flowers the family would request donations in Joe’s name to the following organizations: National Leiomyosarcoma Foundation at https://nlmsf.org/ and Second Chance Outdoors which can be found at https://www.secondchanceoutdoors.net/ A visitation for Joseph will be held Friday, March 18, 2022 from 5:00 PM to 7:00 PM at Missouri National Guard Armory, 7600 Ozark Rd, Kansas City, MO 64129. A celebration of life will occur Saturday, March 19, 2022 from 2:00 PM to 4:00 PM at Missouri National Guard Armory.
See more See Less

In Memory of Joseph Matthew Messina