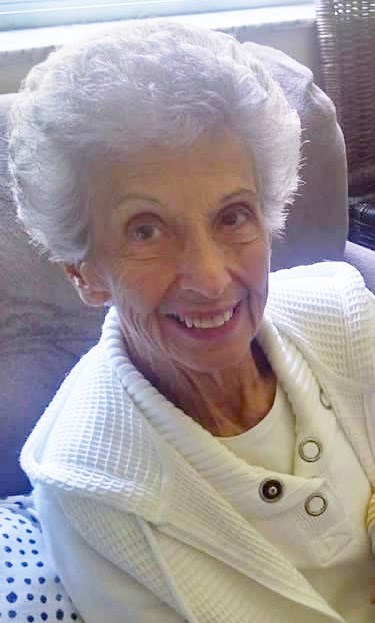 Frances (Frankie) Brown Conrad, 91, of Lancaster, Ohio, passed away on September 21, 2021, at Pickering House in Lancaster. Frankie was born in Whitehall, Ohio, to Rodney and Ella Brown on August 21, 1930, and then moved to Lancaster, Ohio. She went to school in Lancaster, where she met the love of her life, Jack Conrad, in the 5th grade. She married Jack on July 7, 1951. Because he was in the Army and would be stationed out of the country for a couple years, Frankie and Jack decided to marry prior to him being deployed. They drove to Indiana with their great friends, Audrey and Dick Williams, where they started a beautiful 58 years of marriage. Frankie worked as a legal secretary for numerous attorneys in Lancaster. She attended Mills Memorial United Methodist Church, where she volunteered on many committees. She loved her Lancaster community where she had volunteered for the Georgian Museum and spent many hours volunteering for the Friends of the Park. She enjoyed antiquing, gardening, reading, trips to the Amish County and Frankenmuth, Michigan, and just taking simple drives with Jack. She had many friends whom she adored, and she loved spending time with her family. Frankie was preceded in death by her husband, Jack Conrad; her parents, Rodney and Ella Brown; her baby sister, Ruth Eleanor; her three sisters and brothers-in-law Jeanne & Bob Leeper, Mary and Jack Tschappat, Maxine and Bill Yokich; her nephew, Joe Tschappat; and her great nephew, David Fleming. Frankie is survived by her children, Steve (Dee) Conrad of Lancaster and Lori (Vince) Musselman of Canal Winchester; Grandchildren Zach (Michelle) Musselman, Heather Musselman, Shelby (Andy) Dickman, Dan (Miko) Conrad, Michael (Tiffany) Conrad, Kyle (Jessica) Musselman, and John Conrad; Great-Grandchildren Chase Balser, Emirah Balser, Brayden Musselman, Caetlyn Musselman, Hudson Musselman, and Kalea Conrad and many nieces and nephews. Viewing will be held at Halteman Fett & Dyer Funeral Home on Wednesday, September 29, 2021, from 5:00 p.m. to 8:00 p.m. Funeral will be held at funeral home on Thursday, September 30, 2021, at 10:30 a.m. Burial will follow service at Forest Rose Cemetery, Lancaster, OH. The family wishes to extend our sincere thanks to the special care given to Frankie by the loving staff of Primrose Memory Care, Scott’s Place, and Pickering House. In lieu of flowers, memorial contributions may be made to Fairhope Hospice and Palliative Care, 282 Sells Road, Lancaster, OH 43130.
See more See Less

In Memory of Frances "Frankie" Conrad