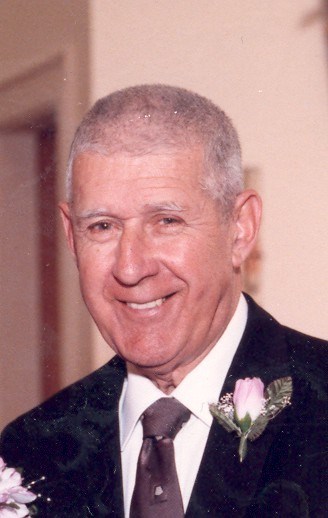 George H. Ferguson 1922 - 2011 Auburn - Mr. George H. Ferguson, age 88, a resident of Pine St. in Lisbon Falls passed away Monday evening April 25th at The Hospice House with family at his side. He died from a number of debilitating diseases, but most prominently from a broken heart from the loss of his wife of 60 years, Anna in 2005. Mr. Ferguson was born in Lewiston, July 19, 1922 the son of Valerie and Hugh Ferguson and the brother to Arthur, Helen and Francis Ferguson. He was educated in local schools and remained a lifelong resident of this community. In his younger days he loved and played baseball for many of the Lewiston teams, especially the Mohawks. His competitive spirit and baseball skills attracted the attention of the Boston Braves, but his career with them was cut short due to a serious knee injury. In 1981 George became a proud inductee into the Maine Baseball Hall of Fame and also recently witnessed the same honor being bestowed upon his son. Mr. Ferguson was a proud Veteran of the Military having served his country in the U.S. Army until his Honorable Discharge in 1944 and was a Lifetime Member of the American Legion Post 158 in Lisbon. In 1945 he married Anna Bottos of Lisbon Falls whom he missed dearly these past years. George worked most of his life as an overseer in the Finishing Dept. of the now defunct Worumbo Mill. He finished his working years as a stock clerk at Bowdoin college. His passion after his baseball years were over, turned to golf where he became a single handicapper at Brunswick C.C. due to hours of practice and competition. After surviving a mini-stroke, his talent waned and he gave up the game for a number of years. His family saw how much he missed the game and surprised him by buying him new golf clubs and a membership at Apple Valley Golf Club. Eventhough his skills had deteriorated, he still enjoyed the companionship of his many golfing friends at the course. His family gives many thanks to those patient and caring friends he made there who he missed most of all. George was an avid Red Sox fan, often cheering them on, and swearing at players taking called third strikes. Until his life became sedentary, he enjoyed watching three generations of family play sports and develop an affinity for gardening. Later on, painting and reading occupied most of his time. When in the public eye, he was quite social, say many, but down deep he was a very private person who found it very difficult to express his love of his family until he felt the years slipping away. He was a proud man who possessed a great deal of common sense. His decisions and choices always seemed to work out for the best. His greatest fear was being a burden to anyone. His friends and family will miss him dearly. He is survived by his daughter Nancy Fournier and her husband Roger; his son George Ferguson and his wife Suzanne; grandchildren Jeff Fournier and wife Pam, Andy Fournier, Adam Ferguson and Allyson Collins and husband Adam; great-grandchildrenAshley and Austin Fournier; his brother Francis Ferguson of Stamford, CT; several nieces and nephews and his favorite pet Angel. The family wishes to thank Dr. Austin, Maureen, Donna and the entire staff of the Hospice House for their care, compassion and support shown to George and his family during this difficult time. He was predeceased by his brother Arthur and his sister Helen. You are invited to share your thoughts, condolences and fond memories with George's family by visiting their guestbook at www.crosmanfuneralhome.com Funeral Notice: Ferguson, George H. 4/25/11. Visitation at the funeral home Thurs. 2-4 & 6-8 pm. A Mass of Christian Burial will be celebrated at Holy Trinity Church Fri. 10 AM. Committal to follow at Ss. Cyril & Methodius Cemetery. Those wishing may make donations in his memory to the Lisbon Junior Athletic League (LJAL), c/o Tony Austin, 72 Webster Rd. Lisbon, ME 04250 or to the Androscoggin Home Care and Hospice Foundation 15 Strwaberry Ave, P.O. Box 819 Lewiston, ME 04243-0819. A service of Crosman Funeral Home, Cremation and Monument Service 40 Main St. Lisbon Falls 353-4951
See more See Less

In Memory of George H Ferguson