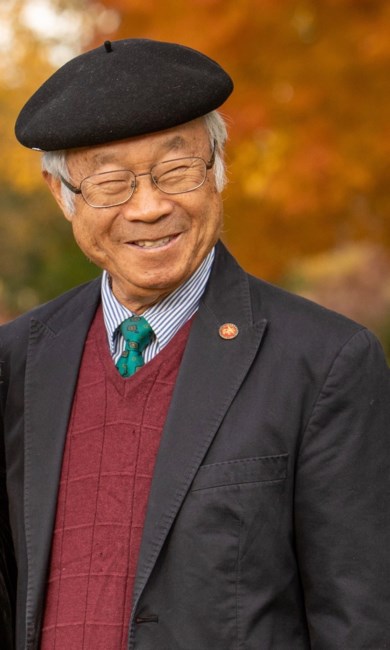 Vincent Ilwha Chung, age 80, of Loveland, Colorado passed away on Thursday, September 29, 2022. Vincent was born on July 20, 1942 in Changwon, South Korea to Chung Hun-Young and Park Sool-Seng “Margaret.” He is survived by his wife Mary, his children Sabina Raver (Paul) and Daniel Chung (Emily), his grandchildren Ava Chung, Gavin Chung, Everett Raver, and Davis Raver, his siblings DongHwa Chung (Choonja) and HwaJa Chung (GyuWan), his nephews and nieces, Il-Hyun Chung, Dong-Hyun Chung, Youree Chung, Nari Chung, Stephen Chung. Vincent grew up in the seaside military town of Jinhae in South Korea. He attended the Korean-Catholic seminary for secondary school and was a member of the Korean Marine Corps for his military service. He was suspended from the seminary when he helped a fellow seminarian sneak away to marry the school nutritionist. Vincent immigrated to the United States in September of 1974 to attend Loyola University in Maryland for his Masters degree in Education. While in Maryland, Vincent met and married Mary. Together they embarked on an entrepreneurial life, starting with the Mount Vernon Super Mart in Baltimore. In 1978, the Chungs moved to Fort Collins, Colorado where Vincent ran a liquor store in Old Town Fort Collins as well as several dry cleaning businesses. In 1980, they purchased the Estes Village Motor Inn and made Estes Park their home. In 1992, they purchased the Twin Owls Motor Lodge. Vincent also had a short stint as The Shoe Lady after purchasing an Estes Valley shoe repair business. After selling their Estes Park properties, Vincent retired to Loveland by purchasing a shopping center. In addition to his entrepreneurial spirit, Vincent was a lover of art and photography. He sponsored several Korean artists, musicians, and calligraphers and brought them to Colorado to share his love of Korean culture with the people of Colorado. Vincent founded Vox Koreana, a Korean language radio station and newspaper to inform the Korean community of news in their new home. He was an active member of the Korean Association of Colorado, The Korean Marine Corp Association of Colorado where he served as President as well as the President of the National Korean Marine Corps Association. He enjoyed photography outings with his photography club and showcased his talents in several exhibitions. Vincent was a founding member of the St. Lawrence Korean Catholic Church and was especially proud of gifting the Italian-made altar showcasing the Last Supper. Vincent was a devout Catholic and always saw the best in people. He took seriously his obligation to help his fellow man by trying to find or make a job for anyone that came into his life. Vincent celebrated his 80th birthday by running races with his grandsons, golfing with his friends and spending time on a religious retreat where he contemplated his life. He received a terminal cancer diagnosis in August and spent his final days surrounded by friends and family. He told his family that he led a full life, had no regrets and was ready to go onto the next world. Fond memories and expressions of sympathy may be shared at www.allnuttloveland.com for the Chung family.
See more See Less

In Memory of Vincent Ilwha Chung