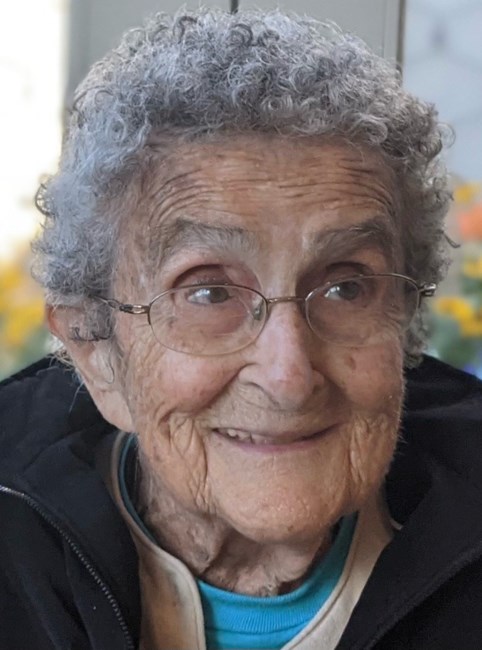 Bruna (Bunnie) Bellotti Bruna (Bunnie) Bellotti of Long Beach Township, High Bar Harbor, NJ, passed away on September 13 at the age of 105. Bunnie was born in Union City, NJ, where she attended Emerson High School and graduated valedictorian. After high school, she performed regularly on stage for Circolo Duse Philodrammatico, an Italian theater group. She later worked as an administrative assistant for North Bergen High School and taught a knitting class at night. In May 1941, Bunnie married Attilio (Til) Bellotti. She is survived by her 4 children, Charles Bellotti and wife Arlene of Princeton Junction, NJ and their children, Christine and Michael, Linda Fischetti of Los Gatos ,CA and her daughter Diana and husband Andy, Marc Bellotti and wife Julia of Coto de Caza, CA and their children Rachel and David and wife Mallory and their daughter (Bunnie’s great granddaughter) Cebu, and Elaine Cembor and husband Paul of Hertford, NC. She is pre-deceased by parents Achille and Concetta Bottinelli, brother Charles, sister Amelia and husband Til. Bunnie and Til made their home in North Bergen, NJ and came to LBI in 1971. They became year round residents on LBI in 1979 and were active members of Italian Club, Saint Francis Church, AARP and Square Dancing Clubs. Bunnie was famous for fitness walking, dancing, needlework, homemade pasta and beach combing. She continued her creative and theatrical endeavors through many years but the centerpiece of her life was her family. Bunnie was laid to rest beside her beloved husband, Til, on September 19 in Manahawkin, NJ. In lieu of flowers, please consider making a contribution in Bunnie’s name to the charity of your choice. These are some suggestions: -Tunnel to Towers -Catholic Relief Fund -City of Hope -Street Dog Hero To leave online condolences and fond memories of Bunnie for the Bellotti family, please visit www.shinnfuneralhome.com.
See more See Less

In Memory of Bruna Bellotti