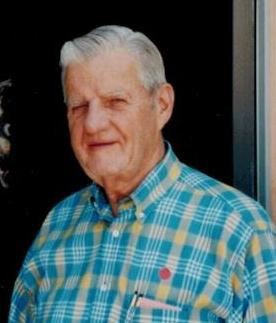 John Edwin Scherer, Sr. died Sunday, May 11, 2014 at the age of 89. John was born August 31, 1924 to Mathias Anthony Scherer, Sr. and Nell Robinson Scherer in Newton, Kansas where he was raised. He proudly served his country as a pilot during World War II in the U.S. Army Air Force from 1943 to 1946. He attended college at Kansas State University and graduated with a B.S. in Geology. He moved to Midland, Texas and began his long career in the oil and gas business. He eventually became an independent geologist in 1970. On October 31, 1953, John married the love of his life, Mary Lou Williams, in Midland. They raised two sons, John, Jr. and Peter. He was lovingly known as “Coach” at the Midland YMCA where he was a long time member and supporter. Over the years he served on several boards within the YMCA. John was honored to serve as National President and the Midland Chapter Chairman of S.I.P.E.S. He was a devoted member, Deacon, Elder, and Trustee of the former Trinity Presbyterian Church in Midland. John was a long time member and former president of Midland Exchange Club. He was also very active within Little League of Midland and a supporter of Boy Scouts of America. During his later years, he enjoyed attending a ballroom dance club and traveling with his wife. John’s sense of humor and generosity will be missed by all that knew him. John was preceded in death by his parents and brothers, Mathias Anthony Scherer, Jr. and James Alfred Scherer. He is survived by his sons, John Scherer, Jr. of Midland, Texas, and Peter Scherer and wife Cindy, of Midland, Texas; grandchildren, Scott Scherer, Kimberly Word, Brian Scherer, Lauren Moreno, Jennifer Wilbanks, and Tracey Scherer; great grandchildren, Sophia Moreno, Ryan Moreno, and Clayton Wilbanks. A memorial service will be held Wednesday, May 14, 2014 at 11:00 am at First United Methodist Church of Midland, Texas. The Reverend Tim Walker will officiate. In lieu of flowers, memorials may be directed to Hospice of Midland, P.O. Box 2621, Midland, TX 79702; Midland YMCA, 800 N. Big Spring, Midland, TX 79701; or Buffalo Trail Council, Boy Scouts of America, 1101 W. Texas Ave., Midland, Texas 79701. The family would like to give special thanks to Susana Aguilera, Joaquina Castillo, Hilda Flores, and Vincent Bennett for their loving care. Arrangements are under the direction of Ellis Funeral Home.

In Memory of John Edwin Scherer