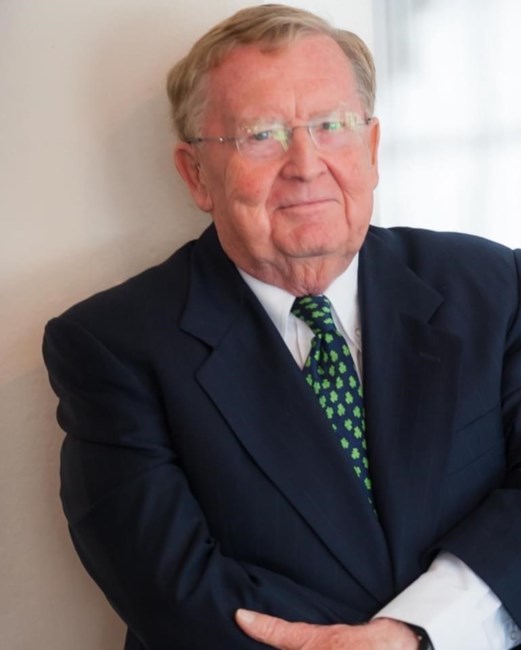 After a life well lived, Ted sailed away on November 20, 2020. Ted was born in Campbellton, New Brunswick and spent his youth in Lachine, Quebec with his family of 10. Ted attended St. Francis Xavier University in Antigonish, Nova Scotia and served as a Royal Canadian Sea Cadet. Ted was an active member at the Royal St. Lawrence Yacht Club for over 50 years and loved to participate in weekly race nights and regattas. Ted was an avid sportsperson and found his passion with sailing. In early adulthood, Ted was a pilot and loved to fly his Cessna. He loved to tell tales of his sailing and flying adventures. He also enjoyed playing hockey with his brothers, teasing his three sisters, skiing in Vermont, hunting wherever you could land a small plane and salmon fishing on the Restigouche. If you couldn't find him he was likely somewhere with a fishing rod or on a boat. Ted owned and operated Dorset Industrial Chemicals Ltd., which was founded by his father Edwin, to manufacture and distribute specialty chemicals to the Pulp and Paper Industry until he retired. He developed patented products in partnership with the Chemical Engineering Department at McMaster University. Dorset and McMaster together won the Natural Science and Engineering Research Council award for best collaboration with industry. Ted's greatest love was family and the Flaherty family reunions are legendary. Ted was a devoted father who was kind and generous to all, patient and strong, a good listener and always present. His dry wit and sense of adventure were hallmarks of his personality. Cherished father of Cheryl Barrett (Paul), Noreen (Jeff), and David (Lee Ann). Predeceased by his parents Edwin and Mary Flaherty and brother James (Christine). Left with many fond memories are Ted or Teddy's siblings David (Karen), Ann (Frank), Gerry, Patrick (Sylvie), Norah (Bob), and Mary. He loved his role as Grandpa to Grace, William, Ewan, Liam, Madilyn and Finn. Uncle Ted will also be missed by his many nieces and nephews. A special thank you to Dr. Barry L. Stein, Director of the Center for Colon and Rectal Surgery at MUHC for his excellent medical care of Ted and never-ending guidance for Ted's children as they navigated Ted's healthcare. Much gratitude to the incredibly supportive staff at Bayview CHSLD in Pointe Claire, Quebec, who provided Ted with humour, companionship and quality of life - in particular, Lynn, Sylvie, Rita, Jackie and Rosalina. A private funeral will be held at St. Patrick's Basilica in Montreal. In lieu of flowers, a donation in Ted's memory to the Montreal General Hospital, Colon and Rectal Surgery Department would be appreciated.
See more See Less

In Memory of Edwin Ted Flaherty