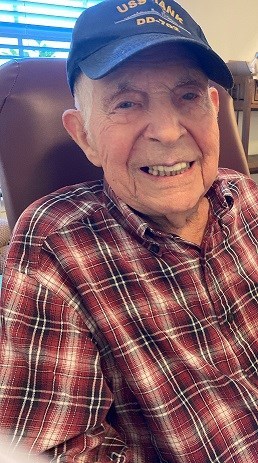 As a young boy Pete enjoyed hunting with his brother William and their friends on Mount Eagle. As he grew, he became more involved with sports lettering four times in football.

After returning home from the war to Cowan he worked on the Railroad as a Fireman. He met Elrose Roberts in the fall of 1946 and they married Three months later. After the Railroad he worked for Anthony’s Milk Co, Hessey Printing and retiring from Denise Paper Co. In retirement he enjoyed spending time with grandkids, traveling and gardening.

His last residence was Carrick Glen.

Yes, we will miss Pete’s smile, his charm and whit and for you guys his fists bumps, but the joy of his stories of the Navy will be everlasting.

In Memory of Pete James Harper