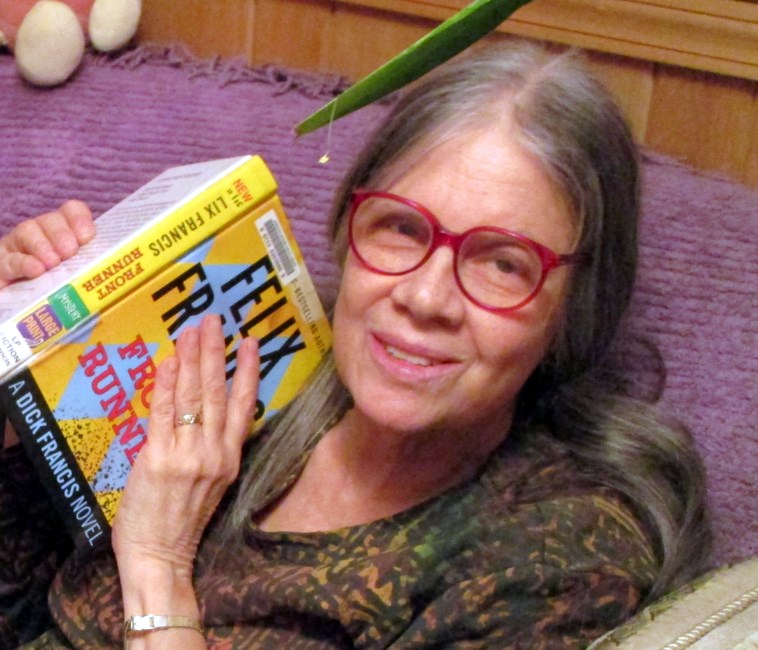 Linda Weisenfeld Gordon, 77, of Orleans, MA, died November 19, 2021, at home with her family. She is survived by her husband of 50 years, Robert Gordon, daughters Rebecca Gordon and Ruthanna Emrys Gordon, daughter-in-law Sarah Emrys, and grandchildren Miriam, Cordelia, and Bobby. She is also survived by many good friends and her cat Colby (“an important part of my support team!”). She is pre-deceased by dear friends Anita Shapiro and Billy Burns. She was a familiar face to patrons of Snow Library, where she worked as an aide for over 30 years.

Linda was born in Hartford, CT, to Nathan and Wilma Weisenfeld in 1944. Her father, who served as an army doctor, did not get to meet her until he returned after the end of World War II. He proceeded to paint a series of Mother Goose murals for her nursery, copies of which hung in his granddaughters’ rooms and now adorn the walls of his great-granddaughters.

In Hartford, Linda attended Weaver High School, where she was editor-in-chief of the literary magazine. Her fascination with words and language would last a lifetime, feeding into her library work as well as her talent as a correspondent. Everyone who knew her well looked forward to her detailed letters and personalized collections of clippings. She couldn’t read a paper or a magazine without noticing connections to the deep interests of those she loved, and wanting to share. She kept shorthand notes on every trip she took, the better to write short-storyesque letters detailing activities, food, events, and circumstances. Her missives were full of detail and she was equally interested in other people’s lives, always pressing to hear just as much in return. She looked for the exact right word even in the hardest times, whether it was writing a meaningful and personal condolence letter, or telling everyone firmly after her brain cancer diagnosis that she was fighting “not courageously but reluctantly.” Almost until the end, she would recognize and approve of an oxford comma.

At Pembroke University (now part of Brown), her interest in literature and art history combined into a love of Hudson River School Paintings. Her love of art would also last a lifetime. Her home is full of the work of local creators from Cape Cod, Monhegan Island, and other places she loved. She loved plays—particularly musicals, one of our family’s shared loves—mystery novels, and folk music. She was an occasional but talented artist in her own right, making intricately themed collages as gifts or for “pin the X on the Y” birthday party games—as well as baking, quilting, and sewing.

In 1966, Linda moved to New York City, and that November a mutual friend introduced her to Bob. They married in 1971 and honeymooned on Nantucket, after which they moved from New York to Orleans. Linda became involved with the Association for the Preservation of Cape Cod (now the Association to Preserve Cape Cod), editing their newsletter to make it “more pithy.” She also oversaw and participated in their pond-monitoring program, for which she received their volunteer award in 2000. She relished the Cape’s many opportunities for hiking and enjoyed identifying birds and wildflowers.

Her first daughter, Ruthanna, was born in 1975, and Rebecca was born in 1981. Linda worked as a stay-at-home mom for several years before starting part time at Snow Library in 1988. She was stubborn in a quiet way—never one to argue but clear and defined about her opinions. She loved cooking and baking for family but also knew with precision that one time in 1997 when it had come out slightly better. She had an organized internal filing system from which she could pull up the names of actors and movies, what you ate on any particular trip, poems, favorite authors, and medical information and appointments. She was the keeper of records and relationships, tracking schedules and family trees with careful attention. Even while sick she ensured that we fed the cat on a timely basis, reminded us of doctor’s visits, and tried diligently to keep taking care of us even as we tried to take care of her.

She held strong beliefs about the environment, civil rights, and the need for workers to organize. In New York, she picketed on strike at the Department of Public Welfare and demonstrated against the Vietnam War. On Cape Cod, she brought her children to anti-nuclear protests on the Orleans town green. She put together carefully-researched library displays for Banned Books Week, Martin Luther King Day, and Pride. She wrote letters to companies and authorities who missed the mark, whether by scheduling important events on Jewish holidays or defunding after-school activities—and letters of praise to those that went above and beyond.

Her loving attention to detail showed in her gift-giving. She would take dozens of children’s books out of the library to review and pick out the ones that would be most appreciated by her grandchildren, track down rarities produced by one obscure artisan decades past, or go through years of online discussions to find the best version of some wish list item—and send along commentary detailing her search and how she chose among the options. Gifts often came with a pun-ny clue on the tag, worthy of the New York Times crosswords that she enjoyed filling out in collaboration with Bob (and whoever else happened to be in the room).

A serious glaucoma attack in 1996 left her visually impaired, interfering with her reading and bird-watching. However, she continued to take pleasure in good meals, petting cats, favorite radio and television shows, conversation with friends, and travel with Bob. Together they returned regularly to Monhegan Island in Maine, an artist colony that only gained widespread electrification in the 21st Century, where they would hike and eat seafood and almost inevitably return with a new painting.

Services will be held at Nickerson Funeral Home on Monday, November 22 at 10am, followed by internment at the Orleans Cemetery at noon. Service attendees must be vaccinated and masked. In lieu of flowers, donations can be made to the Sierra Club, Friends of Snow Library, or the Homeless Prevention Council in Orleans.

In Memory of Linda W. Gordon