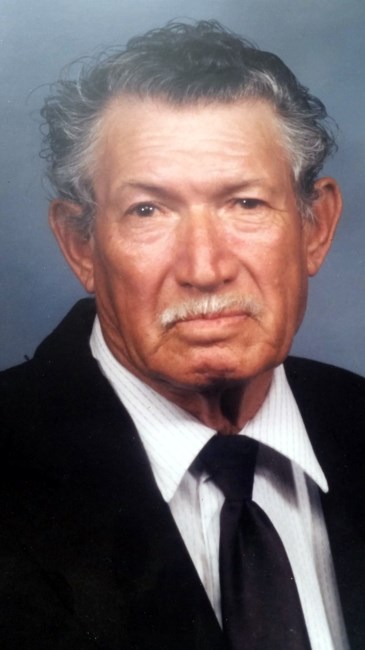 Herculano Duron born in Lockhart, Texas was 90 years old when he passed away on June 24, 2017 in his home in Kyle, Texas. He is preceded in death by his Parents Baleriano and Victoria, his brother Leon, sisters Ramona and Mary, children Richard, Mary Lou, Delia, Herculano Jr., Adam and his wife Beatrice Duron.

He lived at 1414 E Third St, Austin, Texas when he enlisted in the Army on Nov. 5, 1945 and separated from the Army on Dec. 9, 1946. Mr. Duron received a World War II Victory Medal and the Occupational Medal of Germany. After the Military he moved to Alief, Texas where he met his wife Beatrice Moncevies. He took on a father role to her first born children Esther, Reynaldo and Delia while pregnant with a fourth child whom he later named Herculano Jr. Soon after were born Richard, Adam, Eva, Victor, Mary Lou, Domingo, Elizabeth, Beatrice, Tina, David, Robert and Ruben. The family lived in Houston, Texas thereafter until he moved to Kyle, Texas; his final resting place.

Left to honor Mr. Duron in remembrance of his love are his children Ester, Reynaldo, Eva, Victor, Domingo, Elizabeth, Beatrice, David, Tina, Robert and Ruben and many grandchildren and great grandchildren.

Mr. Duron was a father figure to many. He opened his home to a variety of people. He was known by numerous nick names Herk, Wedo, Hercules, Taco de Natha, No Tiene Caso but most of all grandpa Wedo. Mr. Duron was best known for his whiskey drinking, money making, hard working ways. His words of wisdom will forever be cherished

In Memory of Herculano Duron