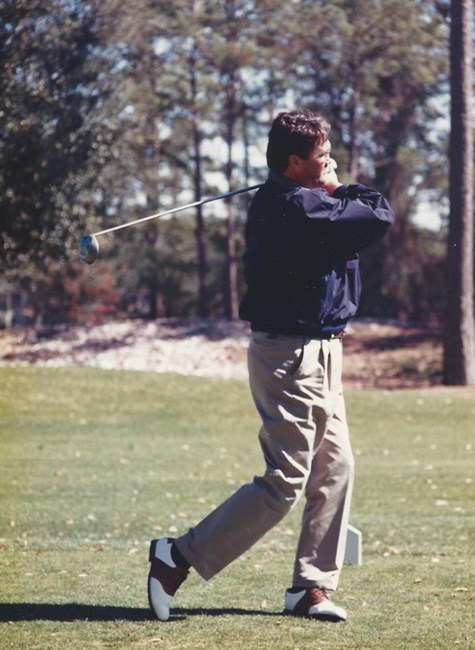 Richard “Scott” Cochran left this world the evening of Sunday, July 31, 2022 surrounded by loved ones. He was born on June 11, 1957 in Miami, Florida to Richard and Ronda Cochran. Scott grew up in Pensacola, Florida, graduating from Pensacola High School in 1975. He completed his Bachelors Degree in Materials Engineering from Auburn University in 1981 and went on to complete his MBA from The University of West Florida in 1992. In 1989 he married the love of his life, Deb. When he asked her to marry him, he told her their life together would be an adventure. They left Pensacola in 1992 and moved around the country with his different positions with Monsanto, Solutia and Ascend, finally moving back to Pensacola in 2017. There were many, many adventures along the way. The simple things in life brought great joy to Scott. He loved spending time with his family and friends. Any chance he had you could find him tailgating with his friends at an Auburn football game where he was known as “Reno”. He loved listening to music and playing ship captain crew. Scott was very athletic in his younger years and loved water and snow skiing. He was on several local basketball and softball teams over the years. He was a great golfer and even did some boxing in college. He enjoyed spending time with his friends at Central Waterside Church where he volunteered when he could. He loved talking to people about Christ. Scott touched so many lives with his kindness and generosity of spirit, his acceptance of all and his unconditional love. He was a mentor to many with his sound advice, always gentle and non-judgmental. He always knew just what to say to put people at ease, never met a stranger and was a comfort to so many, all the true mark of a great man. His spirit will live on in the hearts of friends and family. He is preceded in death by his father, Richard Cochran, mother, Ronda Pippin, step father, Ollie Pippin, step brother, Cliff Pippin, sister Tamara Borkowski, brother Bert Stearns and nephew Rodney Cochran. Left to cherish his memory and continue his legacy are his wife of 32 years, Deb, his brother Greg Cochran (Jean), brother David Cochran (Michele), brother Dallas Stearns (Krysie), niece Tiffaney Ealy (Lloyd), niece Cortney Whiddon (Tommy), nephew Roman Borkowski and many special great nieces and nephews. Contributions in Scott’s memory may be made to Central Waterside Church Pensacola Beach or the Charity of your choice. A celebration of life for Richard will be held Saturday, August 13, 2022 at 11:00 AM at Beach Community Church, 920 Panferio Dr, Pensacola Beach, FL 32561. An inurnment will take place Saturday, August 13, 2022 at Bayview Memorial Park, 3351 Scenic Highway, Pensacola, Florida 32503, followed by a reception to follow will occur at Bayview Fisher-Pou Chapel. Fond memories and expressions of sympathy may be shared at www.BayviewRisher-PouChapel.com for the Cochran family to cherish.
See more See Less

In Memory of Richard Scott Cochran