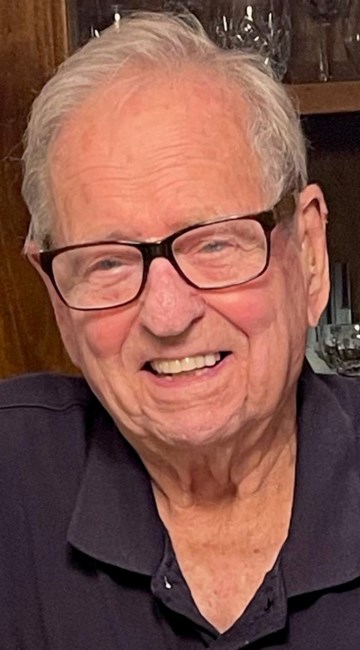 Donald E. Florence of Plainview, New York passed away peacefully on August 19, 2022, 12 days before his 100th birthday. He was preceded in death by his wife Katherine and his parents Louis Florence and Helen K. Phillips as well as his much loved stepfather, Frank W. Phillips. Born on August 31, 1922 in Brockton, Mass, Donald served as a Sergeant in the US Army during World War II. He flew in both gliders and transport planes. He also built, repaired and expanded runways throughout Europe. He and his unit came under heavy fire in Liege, Belgium during the Battle of the Bulge. Donald was a very proud veteran and American. Donald married his high school sweetheart Katherine and settled in Plainview, NY to raise their family of three children. He was a gifted musician, playing trumpet with local orchestras throughout Long Island and Manhattan. He loved music of all types and in recent years was a strong supporter of The Jazz Loft in Stony Brook. He loved the trip out to Stony Brook to listen to the big band orchestras playing there. He enjoyed playing softball with the Town of Oyster Bay Senior Softball traveling team, competing within New York and as far as Michigan. He worked for Colonial Sand and Stone for 36 years. After 69 years of marriage, Katherine died in 2012. Donald was a friendly and sociable man and was much loved by his family and community. Always willing to listen and to help in any way he could, he will be deeply missed. He will always be lovingly remembered by all. He is survived by his children Donald (Amelia), Jacqueline (Donna) and Douglas (Bridget). He had five grandchildren and three great grandchildren as well as many loving nieces and nephews. Visitation will be at Vernon C. Wagner Funeral Home, 655 Old Country Road, Plainview on Tuesday, August 23. A funeral mass will be celebrated at Our Lady of Mercy RC Church Wednesday, August 24 at 10 AM. Interment to follow at Calverton National Cemetery. Donations to The Jazz Loft, P.O. Box 547 , Stony Brook, NY 11790 or to the Wounded Warrior Project, P.O. Box 758516, Topeka, Kansas 66675-8516 in Donald’s name will be welcome. Fond memories and expressions of sympathy may be shared at www.VernonCWagner.com for the Florence family.
See more See Less

In Memory of Donald Edward Florence