Message anglais
Given the exceptional situation we are currently experiencing, due to a pandemic, it is still possible to receive condolences at the funeral home, but under the respect of the recommendations of the government, which are as follow:

- Only 25 people, determined beforehand by the family, are allowed;
- Respect the 2 meters of social distancing at all times;
- Respect the hygiene instructions (hand washing);
- Wearing a mask is mandatory;
- No one who has traveled in the past few weeks be present;
- No one with a symptom of COVID-19 be present. 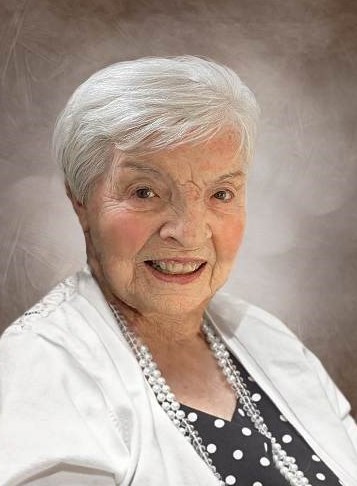 On June 13th, 2021, Diana peacefully left the constraints of Earth behind and returned Home.Diana was born in Hamilton to Samuel Cameron Arrell (Cam) and Margaret Arrell (Peggy), and grew up there with younger sister Athleigh. She attended McMaster University where she obtained her B.A. in 1949. She met her future husband Robert Nevins at McMaster. They set up in Quebec, lastly settling in Pointe-Claire on the West Island of Montreal, where they raised their three children Jim, Margot and Cindy. Diana returned to school and began her new career, first becoming a classroom teacher and then continuing her studies in special education. For many years, until retirement, she was the resource teacher at St. Edmund elementary school in Beaconsfield, where she met her long-time friend Eibhlin McHale. Diana was involved in many community activities before and after retirement. She was a member of the Montreal Lakeshore University Women’s Club, volunteered at the EcoMuseum, and tutored elementary school children. Recreationally, playing bridge, book club, curling and lawn bowling were enjoyed for many years, the latter two along with her husband Bob. At home, she enjoyed planting her garden each year, relaxing in the pool, catching up on Coronation Street, and puzzling through the newspaper’s cryptic crossword. Diana is predeceased by her husband Bob (2018). She is survived by her three children Jim (Jan), Margot and Cindy, her sister Athleigh (Maurice), her grandchildren Mark (Crystal), Rhonda (Mark), Carol, Dan (Minjin), Scott (Zhichao), Amy (James), her great-grandchildren, her sister-in-law Anita (Bill), and her nieces Wendy (Jim), Anne Marie and Maureen (Randy), and nephew Tom (Cheryl). The family sends their heartfelt thanks to the caring staff of Sunrise Senior Living in Dollard-des-Ormeaux, and to Andrew De Four and staff of Customized Homecare. Donations in Diana’s name can be made to the Montreal Lakeshore University Women’s Club-Scholarship Fund at https://www.mluwc.com/scholarships.html, or to the Teresa Dellar Palliative Care Residence at https://residencesoinspalliatifs.com/en/donate-now/. Due to COVID precautions, a small, private service will be held.
See more See Less