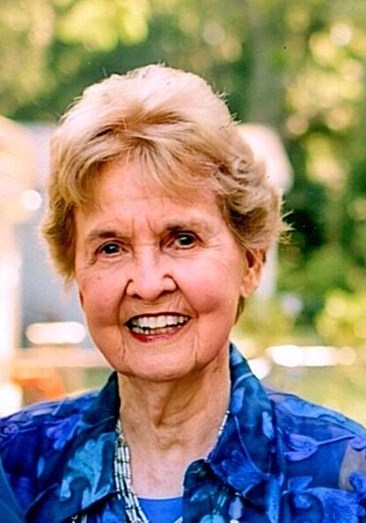 Betsy Jones Stone, age 97, passed away peacefully at home on Thursday, November 24, 2022, Thanksgiving Day. Visitation will be at Parkway Funeral Home on Tuesday, November 29, from 9:30 a.m. until 11:00 a.m. A service will follow at 11:00 a.m. in the chapel at Parkway. Burial will be at Lakewood Memorial Park. Betsy Taylor Walton was born on December 14, 1924, to Marion Martin Walton of Newton, MS and the former Grace Taylor of Florence. She, along with her brother John, grew up in Jackson and Florence, Mississippi, surrounded by a loving extended family. After graduating from Florence High School in 1942, Betsy attended Ole Miss where she formed many lifelong friendships. She joined Chi Omega Sorority, where she was selected Model Pledge and GM (Pledge Mother). She was a member of Cwens and Mortar Board, as well as the music fraternity Sigma Alpha Iota. Betsy was also selected as sponsor of the Cardinal Club and elected an Ole Miss Favorite her junior year. At the young age of 19, Betsy spent three miserable days traveling across the country by train to marry her college sweetheart, Ensign Jerrell W. “Fid” Jones, from Indianola, MS, who was stationed as a naval officer at Morro Bay, California. They met at Ole Miss where Fid played quarterback for the 1942 Ole Miss Rebels. Fid and Betsy were married on June 17, 1944, in San Luis Obispo, California. Following the war, Fid and Betsy made their home in Jackson, Mississippi, where they raised their three children - Carol, Jerry, and Laura. In 1952, Fid and “Goat” Hale began what would become the largest athletic supply company in the state, Hale & Jones Sporting Goods. Betsy worked alongside Fid in the beginning days to grow and develop the business. It took a lot of hard work, good planning, and shrewd management, as well as much perseverance and sacrifice. The business continued to expand until Fid’s untimely death in 1981. In 2006, Betsy married Robert L “Bubba” Stone. They enjoyed six years of marriage until Bubba died in 2012. Betsy was active in many activities at First Baptist Church Jackson. She was a much-loved Sunday School teacher and taught in the International Ministry. She spoke on many occasions to the Monday Ladies’ Bible Study at FBC. Betsy had a strong Christian faith that was evident in her teaching and her life experiences. She loved genealogy, traveling to courthouses in Mississippi, and researching records that connected her to her ancestors. She also was an avid traveler. Most importantly, she was an extraordinary mother, grandmother, and great-grandmother. Betsy was preceded in death by her husband, Jerrell W. “Fid” Jones, her second husband, Robert L. Stone, her parents, Marion M. Walton and Grace Taylor Walton Laird, and her brother, John Buckley Walton. She is survived by her children, Carol Jones Simmons, Jerrell “Jerry” Winton Jones, Jr. (Kathy) Laura Jones Craig (Jim); grandchildren, Dr. Worth Simmons (Kristie), David Simmons (Ashley), Betsy Simmons, Grace Craig Ellis (Kenny), James Craig (Jenna), five great-grandsons, and two great-granddaughters. She is also survived by her nephews, John Walton and Ricky Walton, and her two step-daughters, Janet Henderson (Clark) and Sheryl Chamblee (Steve) and their respective families. The family would like to extend their gratitude to Covenant Caregivers, Baptist Hospice, and Gerline Reddoch for the care provided throughout these last few months. In lieu of flowers, memorials may be made to the Lottie Moon Christmas Offering at First Baptist Church Jackson or to the charity of your choice. For more information and an online guestbook, please visit www.parkwayfuneralhomeridgeland.com.
See more See Less

In Memory of Betsy Jones Stone