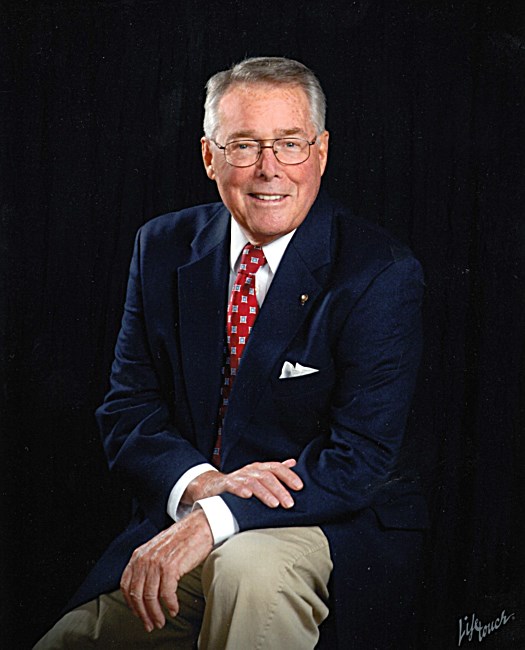 John Patrick Haly passed away at his home in Dunwoody on February 16th. Pat was born March 1st, 1936 in New Jersey and grew up in Havertown, Pennsylvania. Pat was the fourth of six children born to Walter and Marian Haly. His early years in Pennsylvania revolved around pursuits in all sports, church, and his family, building in Pat a lifelong dedication to family unity and a commitment to serve. He graduated from Haverford High School and set out to further his education at Waynesburg University in Waynesburg, Pennsylvania. Upon graduation from Waynesburg, Pat joined his brothers Bud and Dick to work on the St. Lawrence Seaway. During this time, Pat joined the National Guard and began service to his country. Soon the world of commerce called and Pat earned a job in sales management with the Colson Corporation in NY and moved to Manhattan. It was there he would meet Judith Boldt and convinced her to not only be his loving bride, but to move south and settle in Atlanta, Georgia. Pat and Judi married in Ridgewood, New Jersey and immediately moved to Atlanta in 1962. Pat’s continued success with the Colson Corporation led him to new challenges and ignited within him, a desire to lead his own company and to pursue his many civic endeavors. Pat and Judi began building their family in 1964 with the birth of their daughter Jill, followed by their 2 sons John Patrick Jr. (Jeep) and Adam. With a young family to raise, Pat moved his family to Dunwoody, Georgia in 1967. Three years later, Pat along with his brother Lin, formed National Personnel Recruiters in 1970. During his tenure as president of NPR, he became one of the foremost executive recruiters and career coaches for top level executives in the Atlanta area. Many prominent business leaders credit Pat with his assistance in obtaining success in their careers. Pat’s natural love of people and his insistence to give back to his fellow man drove him to 30 years of dedicated service to the Buckhead Rotary Club. Pat served in many leadership positions at the club, including President in 1994. He led many of their fundraising initiatives, service projects and received many awards including Rotarian of the Year and a 30 year perfect attendance award. He also compiled and edited the book The Spirit & The Word of the Buckhead Rotary. Pat served on the board of the Tommy Nobis Center and was active in the Junior Achievement Club of Atlanta. Pat and Judi were parishioners at St. Jude the Apostle Catholic Church for over 50 years. He served on a variety of ministries there, including the Finance Council. For the many who knew and loved Pat, he is best described in one word, LOVE. He was steeped in his faith and recognized God’s request to Love thy neighbor- which he did in abundance. He also BELIEVED with conviction in our Lord’s promises and proved that every day to anyone with whom he came in contact. Pat set the supreme example for his 9 grandchildren. He was a servant leader. He was happiest when surrounded by his family at their lake house at the Allatoona Yacht Club or on the beaches near Sag Harbor, NY. Pat loved to sing and spent many years singing with the Stone Mountain Barber Shop Group. He loved to laugh and was always quick with a joke. He was adored by his grandchildren and always kept them entertained playing his ukulele and singing silly songs. Pat touched so many people’s lives with his kind deeds and engaging personality. We love you Pat Pat and we’ll work hard here to continue your legacy. Pat is survived by his wife of 55 years, Judith Boldt Haly, his daughter Jill Haly Owen (Jim), sons John Patrick “Jeep” Haly Jr. (Rose) and Adam James Haly (Emily). He also leaves behind 9 loving grandchildren, Jack Owen, Addison Haly Jr, Thomas Owen, Emily Catherine Haly, Mitchell Owen, Coleman Haly, John Patrick Haly III, Christopher Haly and Judith Grace Haly. Pat is preceded in death by his parents Walter and Marian Haly, his brothers Richard (May) Haly, and Walter “Bud” (Gail) Haly. Pat is also survived by his sister Barbara “Bobby” (Walter) Haigh, and brothers Tom (Barbara) Haly, and Franklin “Lin” (Arlene) Haly, and his beloved sixteen nieces and nineteen nephews. Funeral services will be held on Friday March 2nd 11:00 AM at St Jude the Apostle Catholic Church 7171 Glenridge Drive Atlanta, GA 30328. A celebration of life gathering will be held at the home of Mike and Sheila Post, 270 Grapevine Run, Dunwoody, GA 30338 on Thursday, March 1st at 6:00 PM . In lieu of flowers, donations may be made to the Tommy Nobis Center www.Nobisworks.org or Chip’s Nation www.chipsnation.org.
See more See Less

In Memory of John Patrick Haly