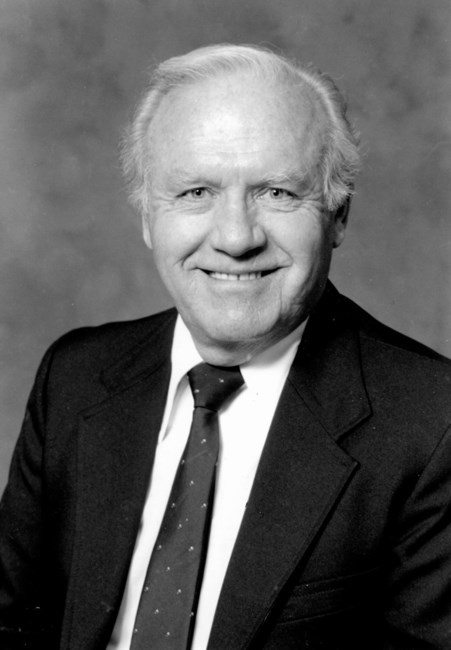 Richard “Dick” James Mitchell passed away with his dear wife Maurine and daughters beside him. Dick was a beloved husband, father, grandfather, great grandfather, son, brother and uncle. Dick was the son of Walter E. and Sarah L. Mitchell. He had three brothers and three sisters and grew up in Salt Lake City. He and Maurine Harper were married in 1950 and are the parents of three wonderful daughters; LeeAnn (Steve) Wilson; Peggy (Todd) Gunnell and Judy (James) Ausick. He has ten grandchildren and 40 great-grandchildren. Dick grew up loving to hunt, fish and camp with his dad, brothers and friends. He always cherished the time he spent with his family and could bait a hook in his sleep. His father taught him how to work at an early age and he used that incredible work ethic throughout his life. He was very creative and loved working on projects to improve his home and help others. He could repair anything! Even the quarter moon according to his young daughter. Dick graduated from South High School in 1945. Then he enlisted in the US Navy and served our country as a rear seat gunner in a dive-bomber. After discharge he returned to Salt Lake, enrolled in school and began courting Maurine. Maurine worked at Auerbach’s and after seeing her there, he commented to his mother, “Wow, she is beautiful!!” That adoration and love continued for 71 years. They were married the afternoon of August 29,1950 in a civil ceremony and their marriage was later solemnized in the Salt Lake Temple. He was a faithful member of the Church of Jesus Christ of Latter-day Saints. In 1952, he graduated from the University of Utah with a Bachelor of Science degree. In 1958, Dick and Maurine moved their family to Lyman, Wyoming and together owned and operated Bridger Valley Motors (Chevy and Buick dealership). After 13 years of painstaking work in the car business, they moved back to Salt Lake City where Dick worked in several different capacities for the State of Utah. He was a Legislative Fiscal Analyst, Deputy Director of the Department of Natural Resources and retired as the Director of State Lands and Forestry. After retirement Dick and Maurine traveled to several countries and had many memorable vacations visiting temples and seeing the sites. He continued to hunt, fish and camp until his health began to decline. Preceded in death by his parents: Walter E and Sarah L Mitchell, sisters: Beth Howe, Grace Wiser, Helen Moser, brothers: Robert W. Mitchell and Walter E. Mitchell, Jr. His wife, Maurine, his daughters, grandchildren, great grandchildren and brother, Stephen H. Mitchell, survive him. Dick enjoyed life to the fullest and while his passing brings sorrow to us, we love him always and cherish the time we had with him There will be a viewing from 9:30 to 10:45 at the Wasatch Lawn Mortuary 3401 S. Highland Drive, Salt Lake City, Utah. followed by a family graveside service at the Salt Lake City Cemetery. We express our deepest appreciation and sincere gratitude to First Choice Home Health and Hospice for their kindness, gentle care and support over many years. We will always remember Suzanne, Todd, Sam, Megan and many others. Also, Mt. Olympus Rehabilitation Center who cared for Dick the past five weeks for their tender care.
See more See Less