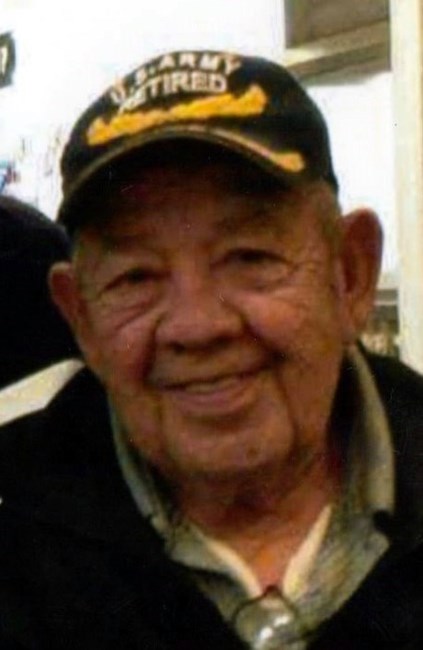 Daniel A. Perez Sr., born November 11, 1931 in Randado, Texas went to be with our Lord on January 14, 2022 at the age of 90. He was preceded in death by his beloved wife of 67 years, Nelia S. Perez; parents, Teodoro and Lorenza Perez; brothers, Oscar Perez and Teodoro Perez III; sister, Bertha P. Vela; grandson, Daniel Perez III and son in law, Mauro Salinas. He is survived by his daughter, Dalia Perez Salinas DDS of San Leandro, California; sons, Daniel Perez (Gloria), David Perez (Rosemary), Dariel Perez (Rachel), Donaldo Perez (Liliaana), Dagoberto Perez (Denise) all of San Antonio, TX; sisters, Aurora Moreno Perez, Rosa Garza, Viola Arredondo and Judy Garza; brother, Eloy Perez; 17 grandchildren, 15 great grandchildren and many nephews and nieces. Daniel devoted 31 years of his life serving in the US Army, having been a veteran of Korean War, Vietnam War and the Gulf War. He was a sports fanatic and enjoyed the last few years of his life watching his grandkids play football, baseball, softball, volleyball and extra curricular school activities. One of his greatest moments was cheering on and witnessing his granddaughter win the Senior League Softball World Series, and seeing his grandson receive the award at St. Mary’s University as the top Conference baseball player of the Year. Daniel also had the opportunity of witnessing his further grandchildren's achievements. One of his grandson's played in the State Quarter Finals, and become an all district player. Another grandson was chosen to play in the Collage all American team in volleyball. Two grandsons participated in the UIL Band competition, and one marched in the Mississippi State University band. One granddaughter won home- coming queen in her senior year of high school. Let us not forget Daniel's two favorite family quotes. Our favorite, "What I told you", rather than "what did I tell you". As well as, "De todos no se hace uno". Mostly said when he was angry. A visitation will be held Monday, February 7, 2022 at Funeraria Del Angel Trevino Funeral Home from 5:00 p.m. to 9:00 p.m. with a rosary to be recited at 7:00p.m. On Tuesday, February 8, 2022 a mass will be held at St. Leo the Great Catholic Church at 12:00 p.m with interment to follow at Fort Sam Houston National Cemetery.
See more See Less

In Memory of Daniel A. Perez Sr.