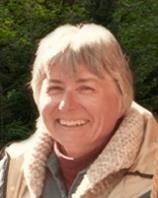 Bernice Martha Hergott was born June 22, 1933 on the family farm near Bruno, the fourth child of Edward and Adelheid Hergott. As a young teen, Bernice suffered from rheumatic fever and her parents were advised that a secretarial job would be suitable for her limited physical ability. Bernice went to business school in Saskatoon and was employed in several managerial positions. In 1958 Bernice entered the religious order of Our Lady of the Missions and until 1977 when she left the order was known as Sister Mary St. Edward RNDM. Bernice hoped to work as a missionary in India and to achieve that end, she received her high school standing while in the Novitiate and later earned a degree in Far Eastern Studies from the University of Saskatchewan. Bernice had many different occupations. She taught school, was the coordinator of Religious Studies in Brandon and worked with the homeless in Winnipeg. Bernice moved to Saskatoon in 1982 and worked as a counsellor at a community clinic until she retired to care for her mother. She continued working for others including helping seniors file tax returns. She was also active in her church including serving as a lector in St. Paul’s Co-Cathedral. Bernice is predeceased by her parents, Edward and Adelheid, her brother Wilfred, sisters-in-law Anne and Virginia Hergott, brothers-in-law Bert Shasko and Don LaRocque, niece Debbie Thoner, nephew Doug Hergott and great nephews Devon Hergott and Cameron Moroz. She is survived by her brothers, Harold, Alvin(Ida), Vic(Ria), and Edward (Mary Alice) and her sisters, Ramona, Virginia, Myra(Maurice) and her beloved housemates Adelaide and Ruth and numerous nieces and nephews. Arrangements entrusted to Aime Laventure.
See more See Less