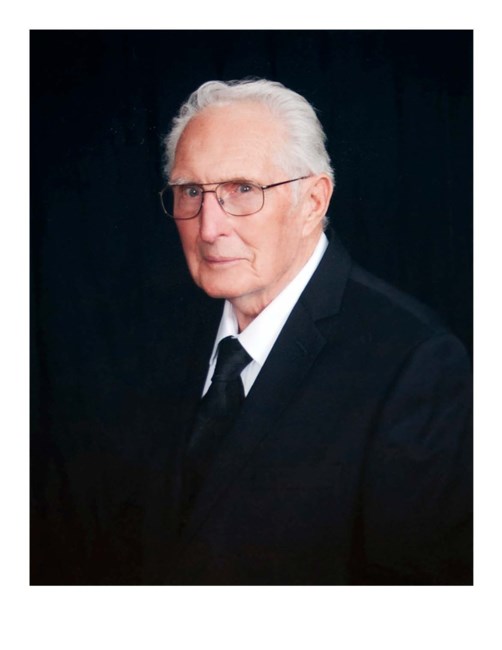 Loren Potter, age 95, of Scottsbluff, passed away on September 7, 2022 at Regional West Medical Center. A memorial service will be held Monday, September 12 at 10:00 a.m. at the United Methodist Church in Gering with Pastors Francis Kinyua and Beverly Russell officiating. Inurnment will be at West Lawn Cemetery. Loren Carroll Potter was born October 27, 1926, the son of Harry Alfred and Matilda Hazel (Green) Potter. He grew up in Hershey, Nebraska, attending school there, and then graduated from Platte Valley Academy in Shelton, Nebraska. Loren married Phyllis Keslar on June 11, 1950. They had three daughters: Patricia, Kathleen, and Donna. Farming was an ambition; however, after the blizzard of ’49, Loren made the decision to pursue another occupation. He had 42 years of service with Nebraska Machinery Caterpillar and John Deere Heavy Equipment. After retirement, he became self-employed, started a handyman service for the elderly, and held several other part-time jobs. One of the highlights was serving as a foster grandparent in the schools. Loren was very involved in volunteer work. He served at the information desk at the hospital, meals on wheels, North Platte Valley Museum, and the hospice program. He also served on numerous church committees, Stephen Ministries, Cooperative Ministry Board and Soup Kitchen. In 2014, he married Shirley Merritt, and his family increased to 37 members and more on the horizon. In lieu of flowers, memorials may be designated to Gering Methodist Church, Hospice, or the foster grandparent program. Online condolences for the family may be left at www.dugankramer.com Loren is survived by his wife, Shirley; sister, Luella Hughes; daughters, Patricia (Paul) Lee, Kathleen (Robin) Hubbard, and Donna (Dewayne) Gimeson; step-children, Scott, Jayson, Clark Merritt, and Tracy O’Connor; numerous grandchildren, step-grandchildren, great-grandchildren, great-great-grandchildren, nieces, nephews, and cousins. Loren was preceded in death by his first wife, Phyllis; parents; step-mother; grandparents; and four siblings.
See more See Less

In Memory of Loren C Potter