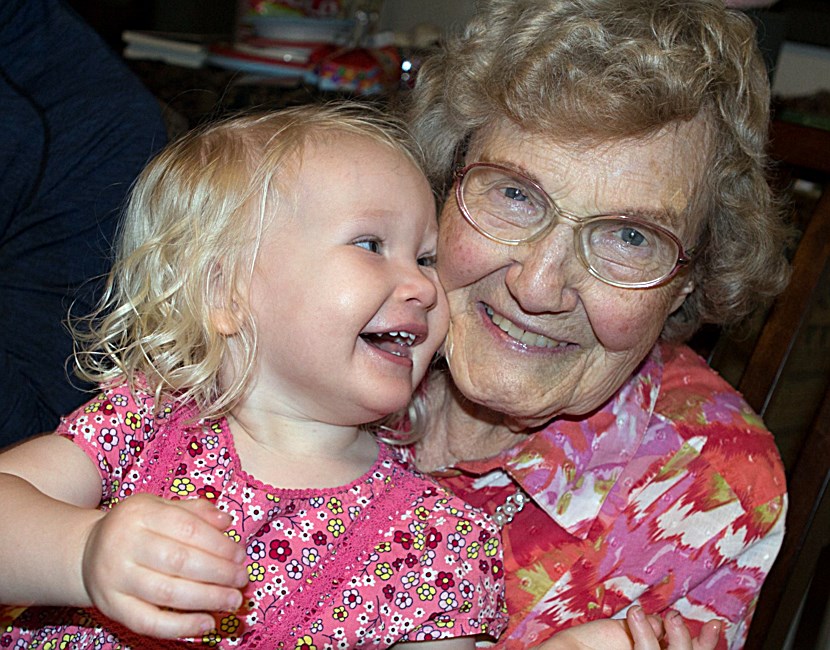 “I’m doing pretty good for a little old lady,” was Mom’s favorite saying of how she was doing over the last 10 or so of her 94 years. She would always say it with a bright and lively smile that you could actually see and feel even over the phone. “Mom” was Betty Donaldson (June 28, 1925 - July 31, 2019), loving wife, mother, grandmother, great-grandmother, aunt, friend and Ms. Betty, born Betty Josephine Bates in Traverse City, Michigan, to Frederick William Bates and Ruth Dalzell Bates, the 3rd of 4 children. Mom lost her own mother at age 3 when Ruth was giving birth to who would have been Mom’s younger sister. She grew up through the Great Depression, and developed a great sense of appreciation and gratitude early in her life. When Mom turned 12 she was informed that she’d have to quit school and find some work so she could contribute to the family. Her two older sisters, Gerry and Shirley, intervened and found relatives for her to live with so she could complete her schooling. She lived with a number of different families during her teenage years, doing babysitting, housecleaning and other various chores and jobs in exchange for room and board, and successfully graduated high school in 1943. On November 22, 1947 she married George Donaldson (Dad) and they had two sons, Roger in 1949 and Kenneth in 1957. Throughout her life, Mom not only felt concern for others, she and Dad did something about it. In the 1970s, they sponsored numerous refugees fleeing from Viet Nam and Cambodia, unwittingly starting a second family. Mom became “Mom” to them, and “Grandma” to the children and grandchildren of the refugees whose lives she helped change. Roger moved to Sweden in 1977 and in spite of the distance, Mom was “Grandma” to Roger’s three children, Christoffer, Eric, and Hannah, and great-grandma to their children, Leia, Nestor and Otis. Over the years, Mom and Dad made numerous trips to Sweden and Roger and his family made numerous trips back to the U.S. as well. When Mom asked someone, “How are you?,” it was more than a greeting. It was an authentic question. Whether you were her hairstylist, her nurse, a friend, or even a stranger, she was genuinely curious about who you were and how your day was going, and she wanted to know how it was to walk in your shoes. She was concerned about others who were struggling- those who had no food, no clothes, or no country, in her own community and across the world. Using her meticulous organization skills, Mom gave generously of her time by volunteering as the church librarian at Seminole First Baptist Church for over 20 years. She and Dad also gathered unwanted clothes on weekends from garage sales for the church’s clothes closet; and volunteered at the Interfaith Food Pantry at Aldersgate United Methodist Church in Seminole, FL. Mom’s generosity and concern extended to animals. After Dad’s death in 2011, she moved to a new home at an assisted living facility, where she became enchanted with feeding the ducks, ibis and other various species of birds at the pond, and the squirrels on her patio in her final years. When they saw her, they all came running. Even they saw her as “Mom.” Mom’s sweet spirit and other-centeredness made her many friends and a favorite aunt to many nieces and nephews. Mom always said her “secret” to life was practicing her 3 P’s: Patience, persistence and perseverance. She was living proof of that, as she was most definitely 94 years young when she passed. Mom’s family is grateful to all of those who called or visited during her final days to share the impact she had on their lives. In lieu of flowers, please make a donation in her memory to the Interfaith Food Pantry, PO Box 7071, Seminole, Florida, 33775, or donate non-perishable food items directly to the Interfaith Food Pantry at Aldersgate Methodist Church, 9530 Starkey Rd, Seminole, FL 33777. Arrangements were made under the direction of Garden Sanctuary Funeral Home, 7950 131st Street, Seminole, FL 33776 / 727-391-0121.
See more See Less

In Memory of Betty Donaldson