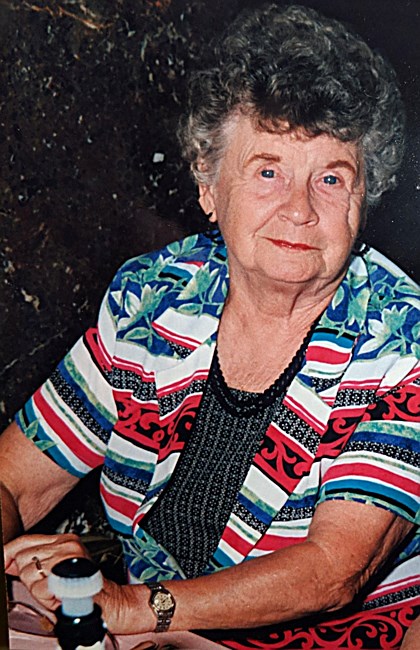 Katherine May Spraul (née Smith), beloved wife of 47 years to the late William Joseph Spraul. Loving mother of James (Susan) Spraul, and the late Karen (Doyle) Smith. Cherished grandmother of Douglas, Michael, Erik, David, Elyse Spraul, and Nathaniel Schreiner. Dear sister of Ronald G. Smith, and sister-in-law of Jack and Betty Spraul. Kay passed away Sunday, February 17, 2019 at age 91. The family will hold a private service at a later date. Kay was born November 17, 1927 to Erma and George Smith of Cincinnati, Ohio. She attended Lockland High School where she met her future husband Bill Spraul. After high school, she attended the University of Cincinnati for a bit, before taking on a secretarial job at General Electric. Later on, she earned her real estate license, selling residential properties in the Cincinnati Area, for Clete McDaniel Realtors. Kay married Bill Spraul September 3, 1949 and eventually moved to the Village of Woodlawn to start their new life together. An avid volunteer, Kay was responsible for the garden club in Woodlawn, and once her children entered school, she was very active as the PTA President for Woodlawn Elementary. After raising her children, Kay worked part time as a bookkeeper for Park Bag, a small paper bag manufacturing company, until she retired with her husband Bill, former Administrator for the Village of Woodlawn. Kay had always been an avid traveler and did so with Bill across the USA in their motorhome. When they moved to Florida, in 1989, they expanded their boating enjoyment from the Ohio River to the Intercostal waterways in Florida, mostly around the Jensen/ Stuart Beach area. After the death of her husband, Kay became the President of Beacon 21 Condo Association and also began to expand her travels. She explored places such as Alaska, Hawaii, Egypt, China and all over Europe with her high school friend, Shirley. In later years, Kay relocated back to Cincinnati to be near her son Jim and his family. Kay was preceded in death on February 17, 2019, by her husband Bill, and daughter Karen. Described as a kind and funny person, she will be missed by her family, including her nieces and nephews and friends.
See more See Less

In Memory of Katherine May Spraul