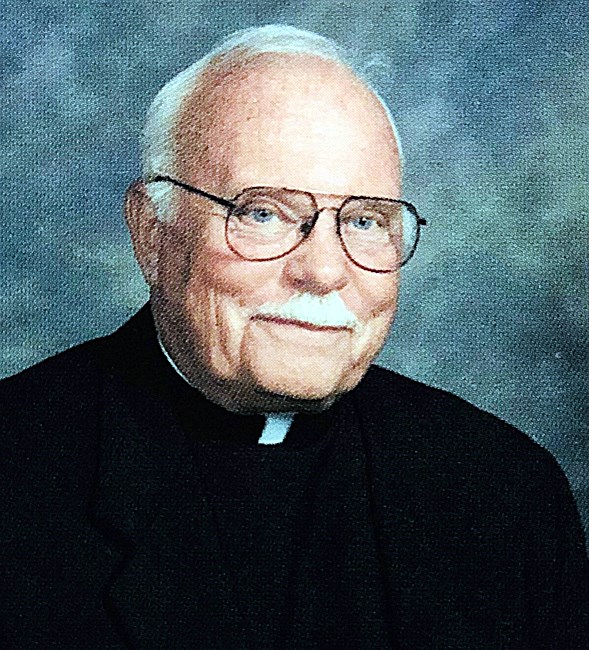 Reverend Robert J. Thorsen passed away on February 7, 2019 in Cincinnati, Ohio. He was born on May 31, 1929 in Milwaukee, WI. He did his preparatory studies at St. Gregory Seminary and studied theology at Mount St. Mary’s Seminary of the West. He was ordained on May 26, 1956 at St. Monica Cathedral in Cincinnati, Ohio by Archbishop Karl J. Alter. Father Thorsen received his first assignment on June 1, 1956 as Assistant at St. Ignatius Loyola Parish, Monfort Heights (Cincinnati). On January 2, 1959, he was appointed Assistant at St. Columban Parish, Loveland, Ohio. On June 16, 1961, he was appointed Assistant at St. Boniface Parish, Cincinnati. On October 27, 1961, he was also appointed Chaplain of Mercy Hospital, Springfield. On August 24, 1967, he was appointed Assistant at Holy Name Parish, Cincinnati as well as Chaplain at Christ Hospital, Cincinnati and to teach at Marian High School. From 1968 to 1977, he lived outside the Archdiocese of Cincinnati to attend St. Louis University for further studies, was on faculty of Webster College, St. Louis, MO and became an associate professor at Sangamon State University, Springfield, IL. On May 30, 1977, Father Thorsen was appointed Associate Pastor of Assumption Parish, Mt. Healthy (Cincinnati). On January 27, 1978, he was appointed Pastor of St. Veronica Parish, Hamilton; appointed Pastor of Holy Angels Parish, Sidney on October 22, 1985; then appointed Pastor of St. Michael Parish, Sharonville (Cincinnati) on July 5, 1988 for a term of six years. Father Thorsen went on medical leave in June of 1993 and retired from active ministry on May 31, 1994. Reception of the Body: Thursday, February 14, 2019 at 9:00 a.m. at St. Michael Church, 11144 Spinner Avenue, Cincinnati, Ohio 45241; 513-563-6377. Celebrant and Homilist: Reverend Edward M. Burns. Visitation: until 10:00 a.m. Mass of Christian Burial: Thursday, February 14, 2019 at 10:00 a.m. at St. Michael Church. Celebrant: Most Reverend Dennis M. Schnurr. Homilist: Reverend Robert E. Schmitz. Burial: Thursday, February 14, 2019, immediately following the Mass of Christian Burial in Gate of Heaven Cemetery, 11000 Montgomery Road, Cincinnati, Ohio 45249. Celebrant: Reverend Bernard J. Weldishofer. Associates of the Marian Pact are asked to offer, as soon as possible, one Mass for the repose of the soul of Father Thorsen, and when convenient, to provide for the celebration of two other Masses. May God welcome His faithful servant to his eternal home in heaven. May he rest in peace. Amen.
See more See Less