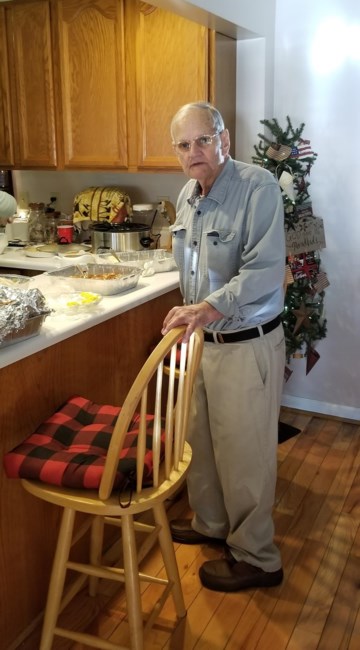 Earl Raymond “Jack” Batman, Jr., 87, of Shenandoah passed away on Tuesday, April 14, 2020 at Harrisonburg Health and Rehab. Center. He was the last surviving member of his immediate family. He was born on March 3, 1933 in Rockingham County and was the son of the late Earl R. Batman, Sr. and Dorothy E. Henshaw Batman. Jack attended Shenandoah High School and later served in the US Air Force during the Korean War. He was a body mechanic and worked for Batman Pontiac and his brother’s body shop. He was a member of the Shenandoah Baptist Church, Avis O. Comer, VFW Post #8613 and the American Legion. On May 28, 1960, he married, Barbara Ann Jobe Batman, who preceded him in death on February 14, 2013. He is survived by his sons, Michael Batman and wife, Doris, Jamie Batman and wife, Linda, all of Shenandoah; grandchildren, Nathan Batman and wife, Jessica, Amber Martin and husband, Garrett, Lindsey Batman and husband, Donnie, Brooklyn Batman and friend, Jacob; great-grandchildren, Corbin, Harper, Bailey, Brayden and Kenway Batman; and numerous nieces and nephews. In addition to his wife, he was preceded in death by a grandson, Andrew M. Batman; one brother and five sisters. Friends may view and sign the register book from 12 – 5 pm, Thursday, April 16, 2020 at Lindsey-Kyger Funeral Home in Shenandoah. A private graveside service will be held at Coverstone Cemetery. Memorial contributions may be made to the Shenandoah Rescue Squad, 544 4th St., Shenandoah, VA 22849 or Shenandoah Fire Department, 201 Pennsylvania Ave., Shenandoah, VA 22849. You are encouraged to visit our website, www.lindseykygerfuneralhome.com to send condolences to the family.
See more See Less