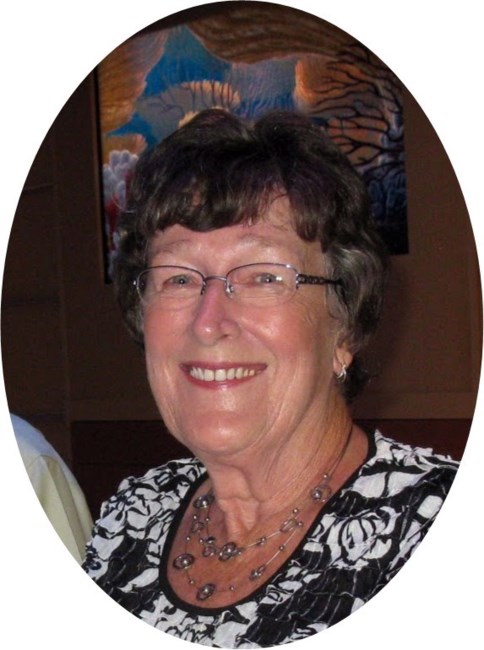 It's with heavy hearts the family of Hazel Mae McDonald (nee Sherren) announced the unexpected passing on Tuesday, Dec 7th, 2021 at the age of 84 years. She was surrounded by her family at the University of Alberta Hospital in Edmonton. She will be forever loved and affectionately remembered by all. Hazel was born in Crapaud, PEI, the daughter of the late Edward and Ella. She is survived by her husband Troy; her son Stephen (Karen) and grandson Matthew; her son Charles (Nicole) and granddaughter Abaigael; her sister Irene and by her brothers: Bob (Wanda), Gordon (Brenda), Jim, Charlie (Noreen). Hazel is also survived by her sisters-in-law Sharon (Ernie) and Jean; her brothers-in-law Dougal (Marlene), Harold (Mavis) and Alfred as well as numerous nieces and nephews. Hazel was predeceased by her sisters-in-law Gail & Jacqueline and by her brothers-in-law Graham & Delmar. Hazel attended Union Commercial college in Charlottetown, PEI then began her 30+ year career with the Bank of Nova Scotia in Crapaud PEI. In the early ’70s, Hazel and her son Stephen moved to Edmonton to seek treatment for rheumatoid arthritis. The best treatment she received was meeting her soulmate Troy McDonald of Hansen's Corner, a short drive west of Stony Plain AB. It was there where they lived on the McDonald homestead raising their son Charles. After retirement, Hazel and Troy moved into Sunrise Village in Stony Plain where they lived for more than 15 years before moving to Kensington Village in Edmonton. Many new friends were made at Kensington Village during the short time she lived there. She was so happy there, and spoke often of her new found friends as if they were long lost sisters. Hazel enjoyed her crossword and jigsaw puzzles, long drives in the country, and always looked forward to happy hour with friends and family. She was quick to talk about her grandchildren to anyone who would listen- whether it was her granddaughter singing in the Kiwanis Music Festival or her grandson's curling bonspiels. She was happiest sitting in Stephen & Karen’s back yard gazebo enjoying the short Alberta summer, he’d invite her over all the time to watch him mow the lawn, a long time running joke between the two of them. Hazel and Troy loved to travel in retirement. They wintered in Hawaii with Jean and Delmar, in Arizona with Dougal and Marlene. Road trips with Charles and Nicole to wine country in BC and trips home to PEI with Stephen and Karen visiting family and childhood friends. Hazel didn’t like surprises, like the time when family flew in unannounced, while she was glad to see them, she was upset because she didn’t have any bacon for breakfast. On the flipside she did like to surprise people, most recently flying to PEI unannounced to surprise her brother on his 80th birthday. Cremation has taken place, interment and memorial/celebration of life for Hazel will be held at 2:00 pm on Saturday, April 16, 2022 at St. Augustine's - Parkland Anglican Church, 131 Church Road, Spruce Grove, Alberta. In lieu of flowers, donations can be made on behalf of Hazel to the Arthritis Society, Suite 1700, 393 University Avenue, Toronto, ON M5G 1E6 or at https://arthritis.ca/?form=FUNFQJJTHDG
See more See Less

In Memory of Hazel Mae MCDONALD