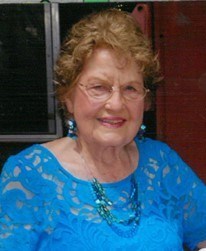 Catherine Boggs Holden, 95, passed away November 27, 2022. Catherine was born in Plaquemine, LA on April 12, 1927, to Allan and Agnes Blanchard Boggs. She married her sweet husband in 1948 after meeting him at Louisiana State University, from which they both graduated. Catherine was a stay-at-home mom and raised a large family. She was very active in the Methodist church. She taught Sunday school, sang in the church choir, and participated in numerous church-sponsored outreach programs for the needy and elderly. When her children were grown, she took up oil painting, got a floristry license, and became a Licensed Nurse Practitioner (LPN) for St. Patrick’s Hospital for ten years. Her biggest passion later in life became the Senior Olympics. She won numerous bronze, silver, but mostly gold medals in various events, including archery, javelin, walking, and swimming. Catherine was predeceased by her parents, her beloved husband of 70 years, Sam R. Holden, Jr., brother Luther Thomas Boggs, sister Johnnie Richie, her grandson Derrick Calhoun, her grandson-in-law Chris Selph, and her son-in-law Mike Hafner. She is survived by her children: Matthew Holden (Lana), Mark Holden, Steve Holden (Lena), Dianne Calhoun (Scott), Keith Holden (Mike), Michael Holden (Kelly), Laura Augustine Stawecki, and Lana Hafner. Grandchildren: Nicholas and Joshua Holden, Erik and Ross Holden, Skyla (Holden) Selph, Shawn Calhoun, Alex Holden and Lauren (Holden) Rayford, and Dalton Augustine. Great grandchildren: Adeline, and Jude Holden, Rios Holden, Warwick and Xavier Holden; Lena Selph; Rylee, Brenna, and Finn Calhoun; Kylie, Katelyn, and Kinley Calhoun; and Oliver Rayford. The family wishes to extend its deepest appreciation to her caregivers: Rose, Sandra, Pauline, Vanessa, Lakeisha, and Amber. Visitation will be held December 3, 2022 in the Sanctuary at Henning United Methodist Church in Sulphur from 9 to 11am, with the service to follow. Catherine will be interred at Mimosa Pines in Sulphur. Memorial donations can be made to One Touch Awakening or Henning Memorial United Methodist Church in Sulphur, LA.
See more See Less

In Memory of Catherine Holden