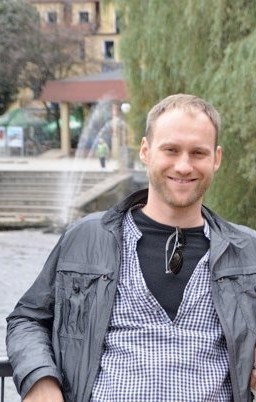 Dr. Przemyslaw (Shamek) Pietucha Dr. Przemyslaw (Shamek) Andrzej Pietucha of Toronto, Canada, had his very rich life come to an unexpected end on October 10, 2015, after a brief illness after just having embarked on another adventure, a sabbatical to study Yoga in India. He was 39 years old. Shamek is survived by his loving parents Kaz and Sabina, and his adoring brother Patryk Pietucha and sister-in-law Alyssa Pietucha. He is predeceased by his grandparents, Franciszka and Jan Pankowski; and Czeslawa and Boleslaw Pietucha. Shamek was born August 24, 1976, in Malbork, Poland, but immigrated with his family in 1982 to Alberta, Canada, where he grew up. A graduate of Louis St. Laurent Catholic High School, Shamek accepted an athletic scholarship to the University of Virginia, where he graduated with a B.A. in Biology in 1999. A butterfly specialist, he swam for the Virginia Cavaliers swimming and diving team in National Collegiate Athletic Association (NCAA) and Atlantic Coast Conference (ACC) competition from 1996 to 1999. During his four-year college career, he received nine All-American honours, was chosen team captain as a senior, and won NCAA national title in the 200-yard butterfly in 1999 - a first for the University of Virginia. While swimming for the University of Virginia, Shamek was also a member of the Canadian national swim team. He won silver and bronze medals in the 100- and 200-metre butterfly events, respectively, at the 1997 World University Games. At the 1999 Pan American Games in Winnipeg, he won a gold medal in the 200-metre butterfly, a silver in the 100-metre butterfly, and a bronze as a member of the Canadian team in the 4x100-metre medley relay. After an impressive career at the University of Virginia, Shamek went on to be a member of the Canadian Olympic team, representing Canada at the 2000 Summer Olympics in Sydney. In 2007, he was inducted into the Virginia Swimming and Diving Hall of Fame. Shamek’s dedication and affinity for challenges had him successfully join the University of Calgary Faculty of Medicine in 2001. That same year he officially retired from swimming to focus on studying medicine. He still made time to found a “Swim Fast Faster” course where he tutored young competitive swimming hopefuls. This was a way to stay connected with the important chapter that was his athletic career. During medical school, he shared his intellect, teaching ability, and patience with his classmates, and infused creativity and energy into the class. After receiving his Doctor of Medicine in 2004, and contemplating several possible programs of postgraduate study, Shamek went on to study Family Medicine at the University of Toronto, completing residency in 2006. He subsequently completed the University of Toronto year of special competency in Anesthesia in 2007, with an aim to gain expertise in chronic pain. After a brief period working in Orangeville, Ontario, Shamek went on to work, from 2009, at the Centre for Addiction and Mental Health (CAMH), where as a primary care hospitalist he provided medical care to those with coexisting mental health and addiction issues. He was also the Physician Lead for the Hospitalist Service for several years. With his love for complexity, it is no surprise he would, at CAMH, further hone his unique expertise and meet a very underserviced health need - the recognition and treatment of pain in those suffering from mental health and addiction issues, improving best practices in this area at CAMH through collaborative work with other health professionals. Shamek, a student and practitioner of mindfulness, also brought this to his practice. His clinical practice, learning from his patients, an open mind and belief that boundaries are often artificial led Shamek to apply to the University of Arizona, one of the world’s leading programs in Integrative Medicine. On top of his many other roles, he completed this two year Fellowship in Integrative Medicine in 2014. During that same period in 2012, he founded a website entitled “Integrative Health Sojourner” where he shared insights and evidence regarding integrative medicine. Taking together his diverse personal, professional and education experiences, Shamek decided about a year ago to spend the better part of a year on academic sabbatical from CAMH, where he would study with world leading Yoga and Mindfulness experts in India. This was part of his ongoing commitment to bring integrative and complimentary medicine to his health care practice, and to share his learning with his colleagues. It was in Delhi, days before he would leave for his first Yoga retreat where this dream and his life were cut short. For all his achievements, Shamek remained true to his simple roots and values. Above all else, he cared most about his family and friends, whom, to a fault, he always put ahead of himself. He saw the best in, and shared a piece of himself, with every person he met. His mischievous smile and laugh were contagious. He was patient, loyal, selfless, and gave all his heart to every relationship. It is no surprise that countless people are struggling to imagine life without him but at the same time, can’t help but keep his memory alive as everyone who met him was changed for the better. Shamek’s life will be celebrated on Sunday Oct. 18, 2015 (details below). Donations in Shamek’s memory may be made to either the Barbra Schlifer Commemorative Clinic serving women who are victims of abuse, or to Swimming Canada’s Victor Davis fund for young athletes. Visitation Sunday, Oct. 18, 2015 10:00 am – 1:00 pm Rosar-Morrison Funeral Home and Chapel 467 Sherbourne St., Toronto Funeral Service Sunday, Oct. 18, 2015 2:00 pm – 3:00 pm The Berkeley Church 315 Queen St. East, Toronto Celebration of Shamek’s Life Sunday, Oct. 18, 2015 7:00 pm The Berkeley Church 315 Queen Street East http://swimswam.com/canadian-olympian-shamek-pietucha-passes-at-the-age-of-39/
See more See Less

Celebration of His Life