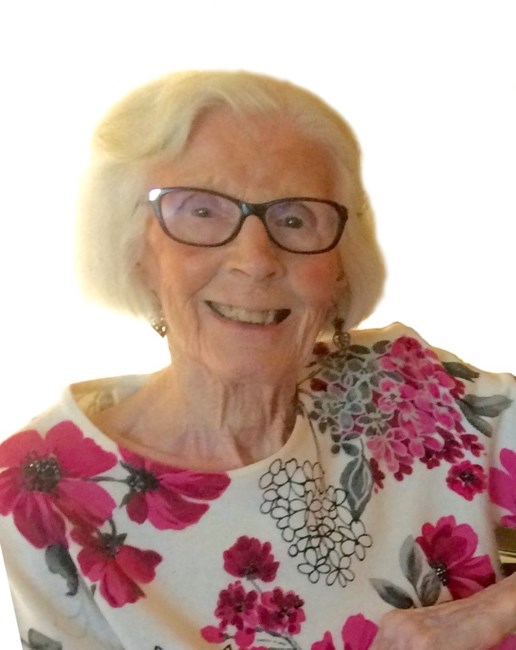 Kathleen Violet (Kay) Sample was born in Grahamdale, Manitoba on July 5, 1922 and died on May 23, 2018 in Victoria, British Columbia. Kay was predeceased by her husband Ken, and their son John as well as all of her siblings (Margaret, John, Mona, Gordon, Jean and Mel.) She will be greatly missed by her children; Lesley (Kevin) Winnipeg, Kathy (Steven) Victoria, Elizabeth (Luc) Puvirnituq, Jennifer (Maynard) Calgary and Joe (Chloe)Vancouver as well as her daughter-in-law, Jean of Victoria. She leaves her grandchildren Jennifer, Julie, Kristy (Faizan), Katie (James), Vanessa (Jeremy), Jessica, Misha, Ian (Sofia), Marcus (Allison), Alison and Ross and great-grandchildren Selena, Cody, Connor, Alex and Armaan as well as numerous nieces and nephews and their families. Kay’s parents, Rebecca (Moore) and John Harkins were Irish immigrants who lived briefly in Winnipeg and then homesteaded in the Interlake region of Manitoba. It was a hard life but Kay blossomed in school. She completed Grades 1-8 in a one room country school, Grade 9 by correspondence and then moved to Stonewall to complete high school. She babysat in exchange for room and board. Kay then attended Normal School in Winnipeg and taught in various schools in rural Manitoba. After meeting and marrying Ken, she settled down in Rapid City to raise her children. In 1964, shortly after the birth of her youngest (Joe), she accepted a term position as a high school English teacher. That term position evolved into a 20 year career as an English teacher in Rapid City High School and Elton Collegiate. While raising her family and teaching, Kay also returned to university and completed her B.A. by taking evening and summer courses. After retiring in 1983 she continued to enjoy reading, gardening, walking, cross-country skiing, mixed curling and traveling. After Ken died in 2001, Kay moved to Victoria where she continued to enjoy walking, reading, traveling abroad and visiting her wide-spread family throughout the country. Kay will be remembered by her family as an inveterate reader, traveler, listener of CBC radio, and baker who up until the last couple years of her life, could out walk most of them. Cremation will be followed by a later internment in the family plot in Rapid City.
See more See Less

In Memory of Kathleen Violet Sample