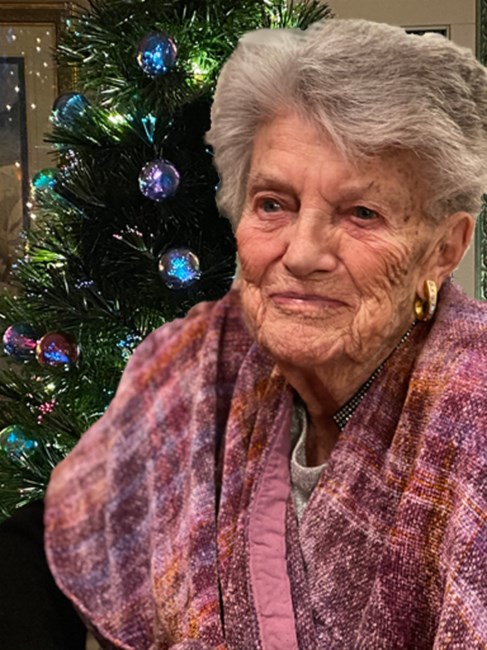 Shirley Constance Ellis passed away on April 30th 2021 at home at Shawnigan Lake BC Born in Saskatoon SK. Dec. 1920 Life Story: Shirley had a wonderful childhood growing up as an only child enjoying many privileges in Saskatoon. She travelled to England and throughout Canada with her mother and father. She was always active and had an excellent work ethic which served her well throughout her life. A product of her time, Shirley graduated from nurses' training at Saskatoon City Hospital in 1946. A few years after graduating, she moved to Vancouver. While nursing at the Shaughnessy Hospital, she met and then married Richard (Dick) Ellis in 1949. They moved to Victoria, where he became a law partner at Clay & Company in 1951. They had five children over eight years while living on Kingsberry Crescent next door to the infamous Carnes Clan. Shirley went back to nursing for a time in the geriatric ward at the Royal Jubilee Hospital. She spent her leisure time curling, playing bridge, and she loved a good game of tennis well into her 90s'. Shirley travelled the world with both friends and family, and as an avid sun worshipper, was always ready to go to any sunny destination to lay in the sun. As the family matriarch, Shirley managed the family cabin at Shawnigan Lake, where she loved hosting summer parties. One of her last wishes was a trip to Hawaii and then Cuba with her daughters. She lived independently at Foxborough Hills for many years before moving to Berwick House on Shelbourne Street. She loved her beautiful apartment while enjoying the social life with her friends. Last August, she moved to Shawnigan Lake to live with her daughter during the pandemic and celebrated her 100th birthday in December. She passed away peacefully, surrounded by her family. Predeceased by: Her Daughter, Patricia (Pat) Jane Ellis on April 1st, 2021. Survived by: Daughters Debbie Battler, (Michael) Cathy Waet, Barb Gardiner(Doug) and son David Ellis (Catherine) Neice Val Avery. 7 Grandchildren, and 14 Great Grandchildren. Beloved Peberdy cousins, extended family and friends. Service Information: A Celebration of Life will be held at a later date A donation in Shirley’s memory may be made to the BC Cancer Society.
See more See Less

In Memory of SHIRLEY CONSTANCE ELLIS