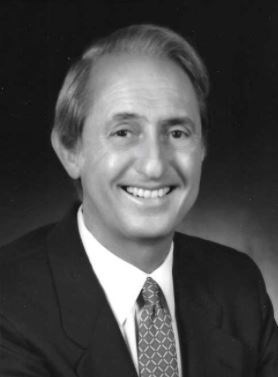 An extraordinary and beloved family man and nationally renowned energy regulatory attorney died peacefully on Wednesday, April 7, 2021, in Potomac, Maryland, with his beloved wife of 63 years by his side. Mr. Grenier was 87 and died from heart failure. In the last weeks of his life, he had proudly boasted to family that he had beat COVID.

Born and raised in New York, Mr. Grenier’s parents and Mrs. Grenier’s parents were good friends and conspired to introduce Pat and Ed to each other at a dinner. The future Mrs. Grenier was reluctant. Mr. and Mrs. Grenier were married June 22, 1957, just after Mr. Grenier’s first year at Harvard Law School, where he served on the Harvard Law Review. While he was in law school, their first child, Tori, was born, and her first crib was a dresser drawer in their walk-up apartment in Cambridge. Pat and Ed were completely devoted to each other and created an extraordinary marriage. They delighted in entertaining friends and family in their homes. Every summer the family gathered in Cape Cod, and Mr. Grenier leaves a legacy of prioritizing the importance of family over all else.

In 1959, after graduating magna cum laude from Harvard Law School, Mr. Grenier clerked for Chief Judge E. Barrett Prettyman on the United States Court of Appeals for the D.C. Circuit, and then began his career at Covington & Burling, where he worked from 1960-1968. He then moved to Sutherland, Asbill, and Brennan LLP (now Eversheds Sutherland) and founded and chaired their Energy Practice, where he spent the next 40 years practicing until his retirement in 2008. Mr. Grenier’s cases involved the development of national policy governing the delivery of natural gas throughout the nation. He served as lead counsel for the ultimately prevailing party in one of the largest energy cases before FERC, the Alaska Natural Gas Transportation System. Mr. Grenier was instrumental in helping to create the Process Gas Consumers Group, a national trade association of industrial natural gas consumers, including many of the largest corporations in the world, who require natural gas in many of their key operations.

Mr. Grenier authored many published articles and chaired many conferences in his field. He very actively participated in the American Bar Association for years, including service as the Chairman of its Section of Administrative Law and Regulatory Practice, as well as membership in the ABA’s House of Delegates. He also served as President of the Energy Bar Association and was a member of its Board of Directors. He served as President of the Prettyman-Levanthal American Inn of Court and as a member of the Board of Directors of the Bar Association of the District of Columbia.

In August 2019, Mr. Grenier received the Albert Nelson Marquis Lifetime Achievement Award, presented by Marquis Who’s Who, and celebrating his many years in his professional network, noting his achievements, leadership qualities, and the credentials and successes he accrued in his field of law.

Among his many other organizational activities, Mr. Grenier served as Chair of the Board of Trustees of the Connelly School of the Holy Child from 1978 – 1985. He also served as a member of the Board of Directors of D.C. Recording for the Blind from 1977 to 1989, as Chair of The Lighthouse Board of Trustees for several years and as President of The Thomas More Society of America for several years.

Mr. Grenier was a devout Catholic, who faithfully attended the Red Mass and was a loyal parishioner of Our Lady of Mercy Church.

In his eighties, Mr. Grenier was a volunteer teacher for Junior Achievement and a judge at robotics competitions. He was a lifelong learner who delighted in intellectual discussion, reading the opinion page of the Post, and discussing the Sunday homily.

In lieu of flowers, please make a donation in the memory of Edward J. Grenier, Jr. to Dysautonomia International’s POTS Research Fund at Curepots.org.