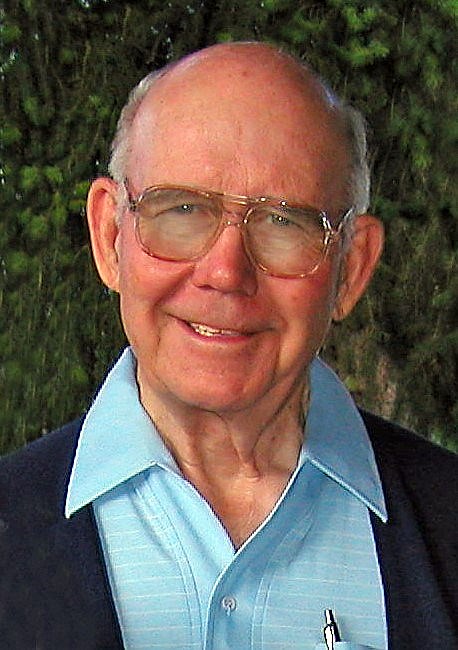 In loving memory … Linn Holder Blankinship was born July 6, 1930, in Anthony, Kansas to Paul and Dorothy Blankinship. Linn learned farming at the early age of 11 following the death of his father in a tragic car accident. Following his graduation from Hazelton High School, he served in the U.S. Air Force during the Korean War from 1951 to 1954 at Sandia Air Force Base in Albuquerque, New Mexico. After receiving an honorable discharge, he attended college on the GI Bill earning a Bachelor’s degree from Emporia State University. His work included teaching, aircraft work, traffic engineering, and housing inspection. He retired from the City of Wichita in 1995. Linn lived a life of service to others. He volunteered as a Scout leader with Boy Scout Troop 806 when his sons were involved in Scouting. He received the Silver Beaver Award in 1981, the highest award that can be presented to a Scout leader by a Scout Council. Linn was also involved in his church serving on various committees over many years at Mount Olivet United Methodist Church. Linn met his wife, Mary Helen McEntire, while she was teaching in his hometown of Corwin, Kansas. Linn and Mary Helen were married in Isabel, Kansas on June 15, 1952. Their first home was in Albuquerque, New Mexico. They later moved to Emporia, Kansas where Linn finished his education and then to Wichita, Kansas. This past June, they celebrated 70 years of marriage with family and friends at a reception at their home. They spent the early years of their retirement traveling in their RV, attending Winnebago rallies and porcelain art conventions, camping with their camping club, and enjoying time with grandchildren. Linn went to be with the Lord on September 21, 2022. Family was very important to Linn. He was preceded in death by his father; mother; step-father, Lawrence Maddox; step-brother, Wendell (Arlene) Maddox; and brother-in-law, James Karney. He is survived by his wife; son, Gary (Janet); daughter, Jan (Lee) Looney; and son, Ken (Heather), all of Wichita, Kansas. Linn leaves five grandchildren: Jon (Alicia), Cherie (Danny), Brynn (James), Ian (Alma), and Eli. Linn has seven great grandchildren, one great, great grandchild, and a sister, Phyllis Karney, of Sun City, Florida. In lieu of flowers, memorial contributions may be made to Aldersgate United Methodist Church, 7901 W. 21st N, Wichita, Kansas 67205, and Good Shepherd Hospice, 7829 E. Rockhill, Suite 403, Wichita, Kansas 67206. A visitation for Linn will be held Monday, September 26, 2022 from 9:00 AM to 10:00 AM at Aldersgate United Methodist Church, 7901 W. 21st St., Wchita, KS 67205. A funeral service will occur Monday, September 26, 2022 from 10:00 AM to 11:00 AM, 7901 W. 21st St., Wichita, KS 67205. A graveside service will occur Monday, September 26, 2022 from 1:30 PM to 2:00 PM at Resthaven Gardens of Memory, 11800 West Highway 54, Wichita, KS 67209. Fond memories and expressions of sympathy may be shared at www.ResthavenMortuary-Cemetery.com for the Blankinship family.
See more See Less

In Memory of Linn H. Blankinship