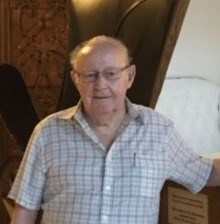 It is with great sadness that we announce the passing of our father, grandfather, and Great grandfather Abram (Abe) Hiebert. Dad passed away peacefully after suffering from dementia and a mild stroke.

Dad was predeased by his parents Katherina and Frank Hiebert; his wife Doris; and many of his nine siblings.

He is survived by his twin sister Sara; his brother Jake; and his children Cathy (Vic), Ken, Sharon (Craig), Chris (Josie), Lawrence (Connie), Carole (Don), Brian and Dorothy; as well as nine grandchildren and eight great-grandchildren.

Dad was born near Steinbach, on February 26, 1932, and grew up in Winnipeg. He married his lifelong love Doris in June of 1954. Dad was in the military and moved from Saskatchewan to British Columbia to Ontario and finally to Manitoba. After the military Dad continued a career as a bus operator for the City of Winnipeg as well as other part time situations.

He enjoyed his years of volunteering with Meals on Wheels and the times he spent playing guitar and singing with his group at senior’s centers and care homes.

Dad was handy and creative, and enjoyed working on many projects

He will be missed and remembered by family and friends.