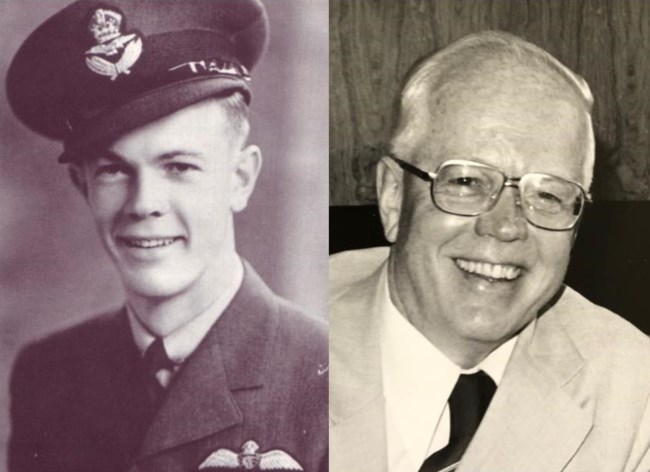 He is survived by his son John (aka “Jock”) (Karen), daughter Laura (Greg), daughter-in-law Sara and five grandchildren Kirstie and Alexander Peden, and Andrew, Ryan and Scott Miskiewicz, as well as two great-grandchildren, Alfred Urban and Eloise Peden. He is also survived by his younger brother, Allan. He was pre-deceased by his son Roderick in 2013, and his wife Jean in 2018.

Murray was born in Winnipeg, but grew up in Portage la Prairie between the ages of 6 and 16, taking most of his early schooling there. He played in the City band, and was active in Portage Collegiate’s cadet corps, winning several rifle marksmanship awards.

In 1940 the family returned to Winnipeg, and Murray took Grade 12 at Gordon Bell and also played solo cornet with the band of the Royal Winnipeg Rifles. Upon turning 18 in 1941, he enlisted in the RCAF, took pilot training and in Nov., 1942, was sent overseas to fly operationally.

After further training in England, he was posted to #214 Squadron, RAF Bomber Command. He and his crew first operated Stirlings performing bombing missions and special operations dropping supplies to the Free French underground. They later converted onto B-17 Flying Fortresses, doing secret radar-countermeasures work. He and his crew were one of five on his squadron selected for a special radar mission in support of the D-Day landings on the night of June 5/6, 1944. He received a special commendation later in June, 1944, following a raid into the Ruhr, when his aircraft was attacked twice, 2 of his crew were wounded and the flight terminating in a successful crash-landing back in England. He was subsequently awarded the Distinguished Flying Cross. Upon completion of his operational tour, he served as an instructor on Fortresses until his return to Canada in July, 1945.

Upon discharge, he took his B.A. at United College (1948) and his Ll.B. (1952) winning a gold medal in each. During this period, in April 1949 he married the daughter of Rev. Phillip Barker, Jean Duncan Barker, with whom he had graduated at United.

Upon graduation, he first joined Manitoba’s Attorney-General’s Department, working as a Crown Attorney for three enjoyable years and then in 1955 joined the firm Greenberg, Arpin and Rich. In 1960 he was appointed Counsel to the Greater Winnipeg Transit Commission and later, the first counsel of the Metropolitan Corporation of Greater Winnipeg. In 1961 he rejoined the provincial government as Ass’t Dep. Minister of Municipal Affairs and later as Dep. Minister of Public Utilities. In 1968 he became the first Chairman of the newly-formed Securities Commission, an appointment he held until his retirement in 1988.

He was gratified, late in life, to be awarded the Legion of Honor by the French government, in recognition of his services during the Second World War.

Throughout much of his life, he was a writer. Three of his books were published, “A Thousand Shall Fall” an account of his flying experiences during the Second World War, “Fall of an Arrow”, detailing the development and eventual cancellation of the Avro Arrow fighter aircraft in the 1950s, and “Hearken to the Evidence” a description of the criminal justice system of the 1950s. The first two were repeatedly reissued over a period of 20-odd years and “A Thousand Shall Fall” received wide acclaim as one of the best and most accurate first person accounts ever written about that conflict.

From childhood on, he was a keen duck hunter, fisherman and skeet shooter. In addition to his writing, his other hobbies included photography, the study of military history and music. As an adult, he learned to play the bagpipes, played with the Cameron Highlanders Pipe Band, and later taught the pipes with the Lord Selkirk Boy Scout Pipe Band (now Lord Selkirk RFM Pipe Band).

Murray had a brilliant and incisive intellect, possessed a wonderful sense of humor, tremendous musical talents, and was a devoted husband, father and grandfather. Murray and Jean enjoyed 69 years of a loving marriage and both were admired for their devotion and commitment to their family. Murray frequently said however, that his greatest satisfaction and enjoyment in life came from being in company with, and keeping abreast of the accomplishments of their five grandchildren.

Funeral Services will be held on Monday, January 17 at 10:00 am at Thomson “In the Park” Funeral Home. COVID protocols require that all in attendance be fully vaccinated. Only those who can show proof of vaccination and government issued ID will be permitted to attend. COVID restrictions unfortunately, will also preclude the usual reception following the service.

In Memory of David Murray Peden