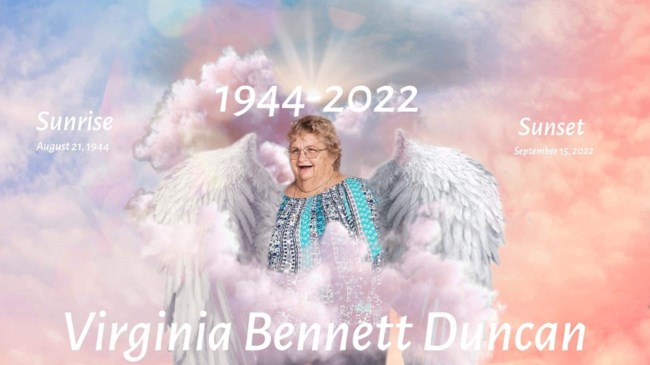 Virginia Dare Duncan, age 78, of Winter Haven, Florida entered into rest on Thursday, September 15, 2022. Virginia was born August 21, 1944 in Winter Haven, Florida. Virginia was preceded in death by the love of her life, Prince OJ Duncan; as well as her parents, John Bennett and Betty Bush, and siblings, Johnny Beale Bennett, Harry Bennett, and Patricia Stallings. She is survived by her children, Gary Sanderson (Tracey), Steven Sanderson (Roberta "Sissy"), John Sanderson (Debbie), and Robert Richards (Christina); brother, Robert, as well as nine grandchildren, and six great grandchildren. A visitation for Virginia will be held Wednesday, September 21, 2022 from 10:00 AM to 11:00 AM at Ott-Laughlin Funeral Home, Winter Haven, followed by a funeral service at 11:00 AM. Virginia will be laid to rest in Glen Abbey Memorial Gardens, Auburndale. Serving as pallbearers are Steve Sanderson, Robert Richards, John Sanderson, Gary Sanderson, Charles Sanderson and Coby Sanderson.
See more See Less

In Memory of Virginia Dare Duncan