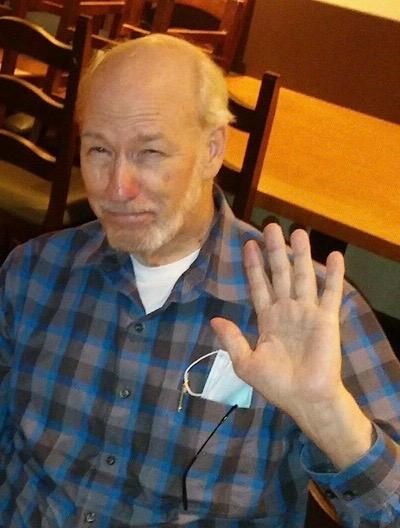 Terry Ernest Caputo, 68, of Ypsilanti, MI, peacefully passed away on January 12th surrounded by loved ones, after an extended illness. Terry was born on August 10th, 1952 to George and Jenny Caputo in Turtle Creek, PA. and moved to Ypsilanti, MI in 1965. After graduating from Ypsilanti High School in 1971, he pursued a degree in Philosophy at Western Michigan University and the University of Michigan. Upon transferring to the University of Michigan, Terry became a member of Word of God – an ecumenical Christian Community. Throughout his studies at U of M, and for many years after, Terry remained a devout and integral member of the Community where he met many great people who touched his heart and became lifelong friends. After completing his studies at the University of Michigan, Terry received his teaching certificate from Eastern Michigan University. He pursued a career in teaching which lasted for over 40 years. Terry taught at Woodruff School and Huron Valley Catholic School where he was employed at the time of his passing. He lived to teach and enjoyed a deep love of sports. His passion for both touched countless students, friends and colleagues. In 1993, he married Leanne Mathay. Terry and Leanne went on to have three children, Anthony, Bennett and Rose. Terry was predeceased by his parents, George & Jenny, his brothers Brady and Craig, and his son Anthony. He is survived by his former wife, Leanne, their two children, Bennett and Rose, his sister, Judy Caputo-Smith and his brother Kent. An online Memorial Service will be held on January 23rd from 11 to 2PM at Christ The King Church in Ann Arbor, MI. You may use the link listed below to access Terry's Memorial page for more details about the Online Service and how to donate to the Terry Caputo Memorial Fund. Terry's Memorial Page Link: https://everloved.com/life-of/terry-caputo/
VER MÁS VER MENOS