Friends are invited to pay their respects at the John M. Taylor Funeral Home from 2:00pm to 4:00pm on Sunday, October 4th. Limited family may be present.


In lieu of flowers, contributions may be made to: 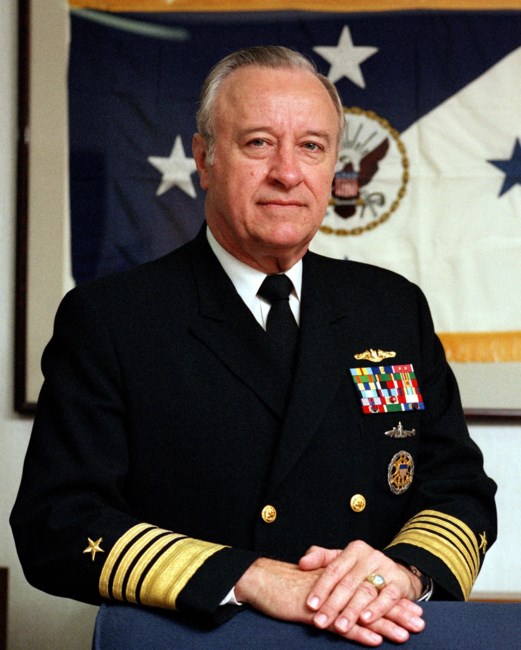 Admiral Carlisle Albert Herman Trost, of Annapolis, Md., died on September 29, 2020 from complications related to a fall. He was 90 years old. Carl was born on April 24, 1930, in Valmeyer, Ill., to Elmer H. and Luella (Hoffmann) Trost. As a child growing up in rural Illinois, Carl didn’t exactly dream about a life at sea. He spent summers helping out on his grandparents’ farm and once built a house with his parents. Though he enjoyed farming, Carl’s true passion was school. He worked several jobs to pay his high school tuition and attended Washington University in St. Louis on a one-year Army ROTC scholarship. At the end of that year, and uncertain the scholarship would renew, Carl applied for an appointment to the U.S. Naval Academy in Annapolis, Md., and entered the Academy in July 1949 as a member of the USNA Class of 1953. Entering the Naval Academy changed the trajectory of Carl’s life more profoundly than he could have imagined. He excelled academically and graduated first in his class, but, perhaps more importantly, he met the love of his life. While serving as Brigade Commander, Carl fell in love with Pauline Louise Haley of Cottage City, Md. They married in May 1954. Together, Carl and Pauline embraced the many challenges of military and family life, raising four children and building lifelong friendships as they traveled around the world for Carl’s flourishing naval career. Of course, Carl never lost his love of learning: he continued his studies in Germany at the University of Freiburg in the first class of Olmsted Scholars and once again graduated first in his class at both the Naval Submarine School and the Advanced Naval Nuclear Power Course. In his 37 years of commissioned service, Carl served as Commanding Officer of the submarine USS Sam Rayburn (SSBN 635 Blue), Commander Submarine Group Five, Deputy Commander of the United States Pacific Fleet, Commander of the Seventh Fleet, and Commander-in-Chief of the United States Atlantic Fleet/Deputy Commander of the United States Atlantic Command. In 1986 he was nominated by President Ronald Reagan to serve as the 23rd Chief of Naval Operations, a position he held from 1986 until his retirement from the Navy in 1990. To date, he is the only Chief of Naval Operations who also graduated first in his class from the Naval Academy. Carl remained involved in the Navy community following his retirement in 1990. In 2002, Carl was named as a Distinguished Graduate of the United States Naval Academy. He served as Chairman of the USNA Alumni Association and was an active member of the USNA Foundation, Naval Institute, USN Submarine League, Military Order of the Carabao and several others. Outside of the Navy, Carl was Chairman of the Olmsted Foundation, a member of the National Eagle Scout Association, and on the boards of Lockheed Martin, General Dynamics, LL&E and GPU, among others. In the early 1990s, Carl helped Pauline bring to life her vision of helping the families of injured and ill service members. The Fisher House Foundation was established after a conversation with their friends Zachary and Elizabeth Fisher, and over the past thirty years, it has provided more than 400,000 families with a “home away from home” near medical centers while their loved ones heal. Carl often said that he wished to be remembered as a good naval officer and, more importantly, as a loving husband, father and friend. He was devoted to his family and was happiest spending time with his children and grandchildren at his Sandbridge, Va., beach house (when he wasn’t using the house to party with the class of ‘53!). Carl impressed his family with his dedication to the daily crossword and his perfect memory, often recalling meetings with foreign dignitaries down to the exact names, dates, and even times. When asked about his successes, Carl said, “I realized when I was young that I could remember things I was interested in, and fortunately I was interested in a lot of things.” Carl is preceded in death by his beloved wife, Pauline, and his sister, Mardelle Lou. He is survived by his four children, Carl Michael, Laura Lee Carrico (John), Steve (Gail) and Kathleen, along with six grandchildren, Scott Carrico, Megan Sugrue (Alexander), William Trost (Michelle), Justin Carrico (Arielle), Haley Trost, and Alexa Trost. Friends may call at the John M. Taylor Funeral Home 147 Duke of Gloucester St, Annapolis, MD 21401 on Sunday, October 4, 2020 from 2 to 4 PM. Burial at the USNA Cemetery is private. A Celebration of Life is planned for September 20, 2021, 11 am at the USNA Chapel. In lieu of flowers, the family wishes memorial contributions be made to the Fisher House Foundation (fisherhouse.org/ways-to-give) or the US Naval Academy Foundation (https://www.usna.com/give) For further information, please visit: https://www.history.navy.mil/news-and-events/news/2020/Trost_23rd_CNO_Passes.html .
VER MÁS VER MENOS