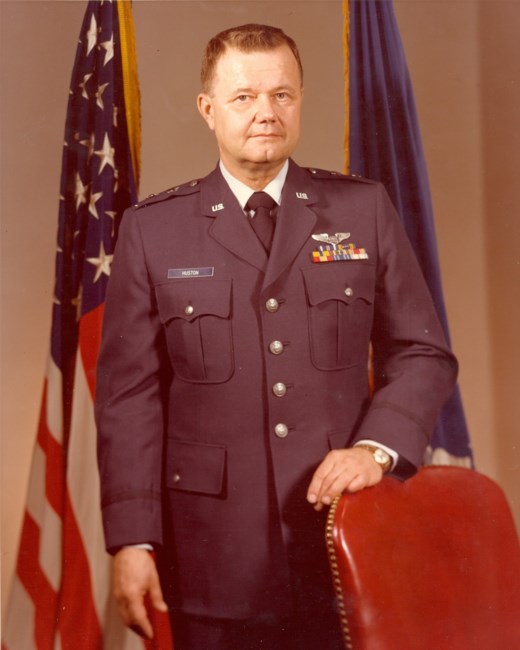 Major General John Wilson Huston, the 4th of 5 sons of James Leslie and Katherine Ray Huston, was born March 6th, 1925, in Pittsburgh, PA. At the age of 17 he enlisted in the Army Air Corps. He entered flight training at Selman Field, LA and graduated with a commission as a second lieutenant in March 1944, and completed combat crew training at Sioux City, IA soon after. In May 1944, he joined the 379th Bombardment Group in the European theater and flew 30 combat missions in B-17 aircraft. Upon return to the United States that November, he attended Navigation Instructor School at Ellington Air Force Base, TX, and then instructed navigation at Liberal Army Field, KS. He was relieved from active duty in December 1945. General Huston was active in the Air Force Reserve program after entering Reserve status in 1945. He commenced with the 375th Troop Carrier Wing at Greater Pittsburgh Airport where he served from 1947 to 1957 as squadron navigator, operations and training officer, and wing administrative officer. In 1957, he transferred to the 459th Troop Carrier Wing at Andrews Air Force Base, MD, and served as wing administrative officer, intelligence officer, and navigator. In 1961, he was assigned to the Reserve Activities Group in the Office of the Deputy Chief of Staff for Personnel, Headquarters U.S. Air Force, Washington, D.C., and in 1963 was assigned to the Air Reserve Forces Policy Committee in the Office of the Secretary of the Air Force. In 1970 he became the first chairman of the Air Force Reserve Policy Council of the Air Reserve Personnel Center in Denver, CO. He became the mobilization assistant to the commander, 20th Air Division, ADC, Fort Lee Air Force Station, VA, in 1972, and was assigned as mobilization assistant to the deputy chief of staff for personnel, Headquarters U.S. Air Force, in 1973. He was promoted to the grade of major general on March 10, 1976, then recalled to active duty several months later to become the chief of the Office of Air Force History, Headquarters U.S. Air Force, Washington, D.C. The general's awards and decorations include the Distinguished Flying Cross with oak leaf cluster, Air Medal with three oak leaf clusters, Joint Service Commendation Medal, and the Air Force Commendation Medal. He held the aeronautical rating of navigator. General Huston’s accomplished military service was accompanied by his scholarly pursuits. In 1948, General Huston received his Bachelor of Arts from Monmouth College, IL, then received his Master of Arts from The University of Pittsburgh in 1950 and completed the Academic Instructor Course in 1953. He earned his Doctor of Philosophy in History in 1957, also from the University of Pittsburgh. Later, in 1972, he completed the Air War College. General Huston served as visiting professor at the University of Pittsburgh, University of Rochester, Ball State University, University of Maryland and the Air Force Academy in Colorado Springs. He served on the faculty of the U.S. Naval Academy from 1956 to 1976, the last five years of which were as chairman of the History Department. After retiring from the Airforce in 1981 he returned to teach at the Naval Academy until retirement 1992-93. Then from 1994-95 was distinguished visiting professor at the Air Force academy in Colorado Springs. The years following were spent writing his book on General Hap Arnold, caring for his wife and enjoying his time at his home in Bay Ridge where he was a resident for more than 50 years. Dad was a devoted husband of 49 years to Dorothy Bampton Huston who predeceased him in 2010. He passed away at home in the presence of his family and friends on June 18, 2021. His memory will live on in his family: daughter Ann Huston Faris and husband John Faris, son John Huston, grandchildren Samuel Faris, Dory Faris, Christina Tolbert, and Nicholas Huston, great grandchildren Colton and Dawson Tolbert and a multitude of nieces and nephews. He will also be remembered fondly by many other friends, neighbors, students, collegues and loved ones. A special thank you to his wonderful caregivers, Carolyn, Geneva and Melissa, who were devoted though to the end. Funeral Services with Full Military Honors for the Major General will be held on November 22, 2021 at 11 am in Fort Myer Old Post Chapel 204 Lee Ave, Fort Myer, VA 22211. Interment immediately to follow in Arlington National Cemetery.
VER MÁS VER MENOS